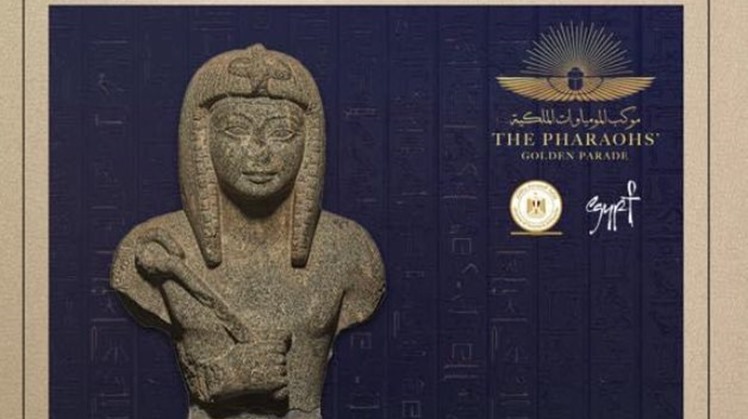 
His principal contributions were to the Sun Temple in Heliopolis; he also decorated the north wall of the Seventh Pylon of the complex of Amun-Re at Karnak.


The original burial place of Ramses IX, a beautifully painted tomb that still retains its colors today, was KV 6; his mummy was moved several times before it was hidden in the Deir el-Bahari cache, where it was discovered in 1881.


His mummy will be transferred from the Egyptian Museum in Tahrir to the National Museum of Egyptian Civilization.

The wait for the Royal parade is finally over! The date is set for The Pharaohs’ Golden Parade on April 3, where 22 mummies will gracefully roam the streets of Cairo.

The royal parade will by all means be unrivalled and once in a lifetime event.


Dr. Khaled El Enany, Minister of Tourism and Antiquities and Major General Khaled Abdel A'al, Governor of Cairo, previously met with representatives of the ministries of defense, interior and security officials, the Supreme Council of Antiquities, and officials of the company doing the transfer of mummies to discuss the final touches in preparation for the start of the parade in the coming days.


During the meeting, the company organizing the event which is specialized in this field said that the transfer will be executed in a way that guarantees and provides the safety and security of atrifacts of the event.

The organizing company reviewed the details of the action plan to bring out the event with the appearance that befits the greatness of our ancestors and the nobility of the Egyptian civilization.


In addition to discussing the plans of the artistic performances that will be presented since the parade's departure from the Egyptian Museum in Tahrir and traveling through the streets of Cairo until reaching the National Museum of Egyptian Civilization in Fustat, and the itinerary of the parade, decorations, artistic elements and propaganda materials that will be used to decorate the streets and squares along the route of the parade, as well as the designs of clothes and costumes that will be worn by the participants in the celebration and the accompanying music.

The Golden Pharoah's Parade will be accompanied on the same day by the opening of the central hall and the Royal Mummies Hall of the National Museum of Egyptian Civilization.

Dr. Khaled El Enany stressed that the transfer of royal mummies will be carried out according to specific procedures that will be taken into account, safety and security wise, followed internationally in the transfer of artifacts.


The artifacts will be placed in advanced sterilization units, and then loaded on carts that have been specially designed and equipped for that event.


This will all be loaded with the aim of preserving the integrity of the mummies, and ensuring that the celebration is carried out in a manner befitting the greatness of the ancient Egyptian civilization.


It is noteworthy that the number of mummies and coffins which will be transferred are 22 royal mummies, dating back to the 17th, 18th, 19th, and 20th dynasty, there are 18 mummies for kings and 4 mummies for queens, including the mummy of King Ramses II, King Seqnen Ra, King Thutmose III, and King Siti The first, Queen Hatshepsut, Queen Mert Amon, wife of King Amenhotep the First, and Queen Ahmose-Nefertari.