ANCIENT 'BOOK OF THE DEAD' SCROLL FOUND IN EGYPTIAN TOMB 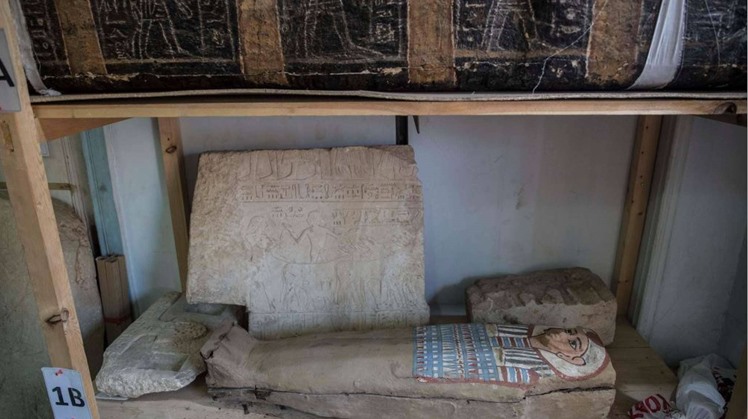 Tue, Feb. 16, 2021
It might not be bound in human skin like the notorious Necronomicon seen in the Evil Dead flicks, but this ancient Book of the Dead scroll recently excavated at the Saqqara necropolis in Egypt does act as a chilling guide to the afterlife.

International archaeologists led by famed Egyptologist Dr. Zahi Hawass have unearthed a new hoard of antiquities at the 4,200-year-old funerary temple of Queen Nearit, a wife of the pharaoh Teti. Teti ruled Egypt from approximately 2323 B.C. to 2291 B.C.

Besides the 13-foot-long Book of the Dead papyrus scroll depicting paths to the netherworlds of the deceased, the treasure also includes over 50 wooden sarcophagi, a Senet board game, a river boat with rowers, a statue of Ptah-Sokar-Osiris, wooden masks, an Anubis shrine, and a burial sanctuary dedicated to an Old Kingdom queen.


As reported in an official statement by Egypt's Ministry of Tourism and Antiquities, Dr. Hawass and his colleagues found the coffins and assorted relics dating back to the New Kingdom era (1570–1069 B.C.) in 52 separate burial shafts ranging from 33 to 40 feet deep. These expansive burial grounds exist in what was once the capital of ancient Egypt, Memphis.

This fortuitous find happened following many seasons of excavations at the mortuary temple representing the cult of Queen Nearit, which surrounds the pyramid of King Teti, the first king of Dynasty 6. The cache of sarcophagi were adorned with ancient god paintings and snippets from the Book of the Dead, a spiritual handbook that was believed to aid the newly expired in navigating to the heavenly paradise of Aaru where Osiris dwells.

Book of the Dead scroll on display in the background - Credit: KHALED DESOUKI/AFP via Getty Images

"The excavation started in 2010, when we discovered a pyramid of a queen next to the pyramid of King Teti, but we didn't find a name inside the pyramid to tell us who the pyramid belonged to," Dr. Hawass told CBS News. "I'd never heard of this queen before. Therefore, we add an important piece to Egyptian history, about this queen."

Perhaps the most intriguing item listed in the bounty, was this 13-foot-long papyrus containing Chapter 17 of the Book of the Dead, a manuscript that ancient Egyptians employed as an instructional manual to navigate the realms of the afterlife. The name of the sacred scroll's owner, Pwkhaef, is inscribed on it. This identical name was also discovered written on a wood coffin and a collection of four shabti figurines intended to serve the deceased.