The story of building the pyramids in the ancient Egyptian civilization .. The beginning with Djoser and his step pyramid 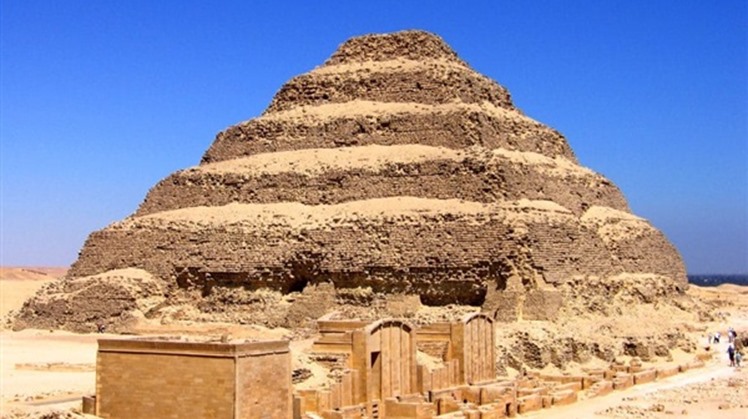 Sun, Jan. 3, 2021
The old state extends across the dynasties from the third to the sixth (2686 BC / 2181 BC), where the power of the state increased during that period, and King Djoser, the first king of the Third Dynasty, built his pyramid in Saqqara, and he wanted to build a tomb in the form of a mastaba Like his predecessors, the kings of the first and second dynasties, however, these terraces increased to reach about five terraces one above the other to be the first stepped stone pyramid in the country's history, but his successors could not complete their pyramids, perhaps due to the short period of their rule.

This was achieved during the reign of his successor, King Khufu (about 2589 - 2566 BC), who built the largest pyramid and hierarchical group, the Great Pyramid, which reached an original height of 146.5 meters, was the tallest building in the world for 3,800 years, and Ibn Khufu and his successor, Jaddaf Ra, did not complete ( About 2566 - 2558 BC) his pyramid in Abu Rawash, and behind him Khafre (about 2555-2532 BC), who carved during his reign the Great Sphinx statue and built a pyramid close to the size of his father's pyramid, and the two temples associated with the pyramid were larger and more detailed than Temples of his predecessors.

The pyramid of Menkaure (2532 - 2503 BC), the son of King Khafre, is an example of the beginning of the decline of royal power.

This trend grew more clearly during the Fifth Dynasty (about 2449-2487 BC) and the Sixth (about 2345-1821 BC). The last king of the Fifth Dynasty ordered Onas to make inscriptions inside his pyramid at Saqqara, known as the texts of the pyramids, which are an introduction to a famous series From the texts known as the Book of the Dead. The purpose of these texts was to help the king successfully reach the other world and become an idol.

Beginning in the Sixth Dynasty it became clear that the king's power had deteriorated, in addition to other factors, and by the end of the long reign of its last king, Pepi II (circa 278-2184 BC), Egypt was no longer under the control of the central government.