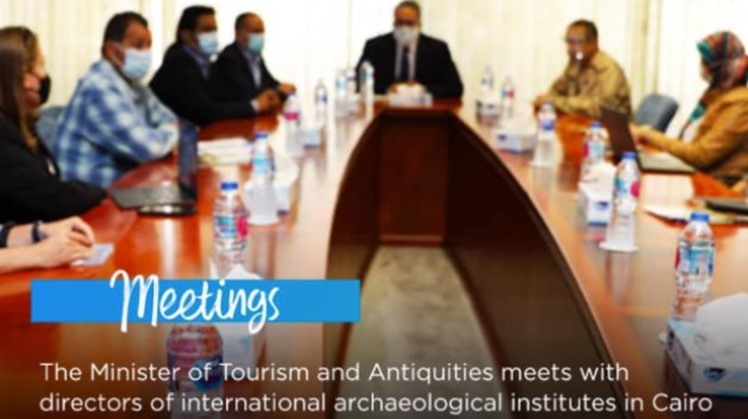 Thu, Nov. 19, 2020
Egypt's Minister of Tourism and Antiquities Khaled el- Enany met with directors of of international archaeological institutes in Cairo, at the Grand Egyptian Museum.


The meeting discussed ways of cooperation in the field of scientific and archaeological work in general and for the Grand Egyptian Museum in particular.


The meeting included the directors of the German, Dutch, French, Polish, Swiss and Italian institutes, in addition to the director of the American Research Center.


Prior to the meeting, Al-Tayeb Abbas accompanied the directors of the institutes on a visit to the museum and its galleries, where they saw the latest progress of work and the preparations for its opening in 2021.


Al-Laithy said that the meeting discussed current and future ways of cooperation and to develop relations between the ministry and those institutes, in a way that benefits and preserves Egyptian antiquities.


He added that the ministry is always keen to communicate with all scientific institutions, to promote archaeological work in Egypt.


Also, he said that it was agreed to organize a number of training courses for archaeologists and conservators working in the ministry to improve their scientific and professional knowledge and exchange experiences with various countries, in addition to strengthening cooperation for writing and reviewing the labels of the artifacts displayed at the Grand Egyptian Museum.