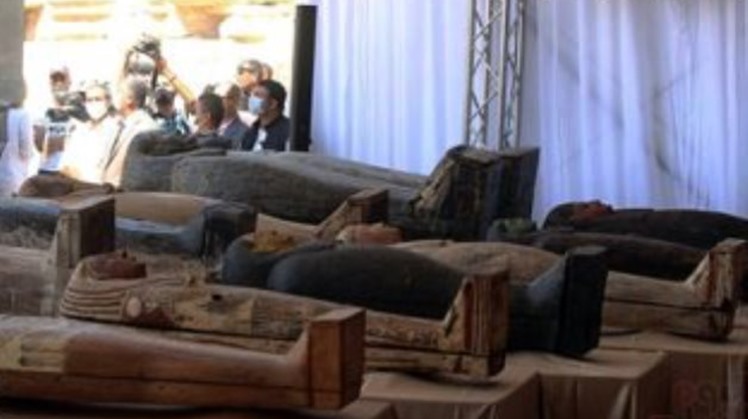 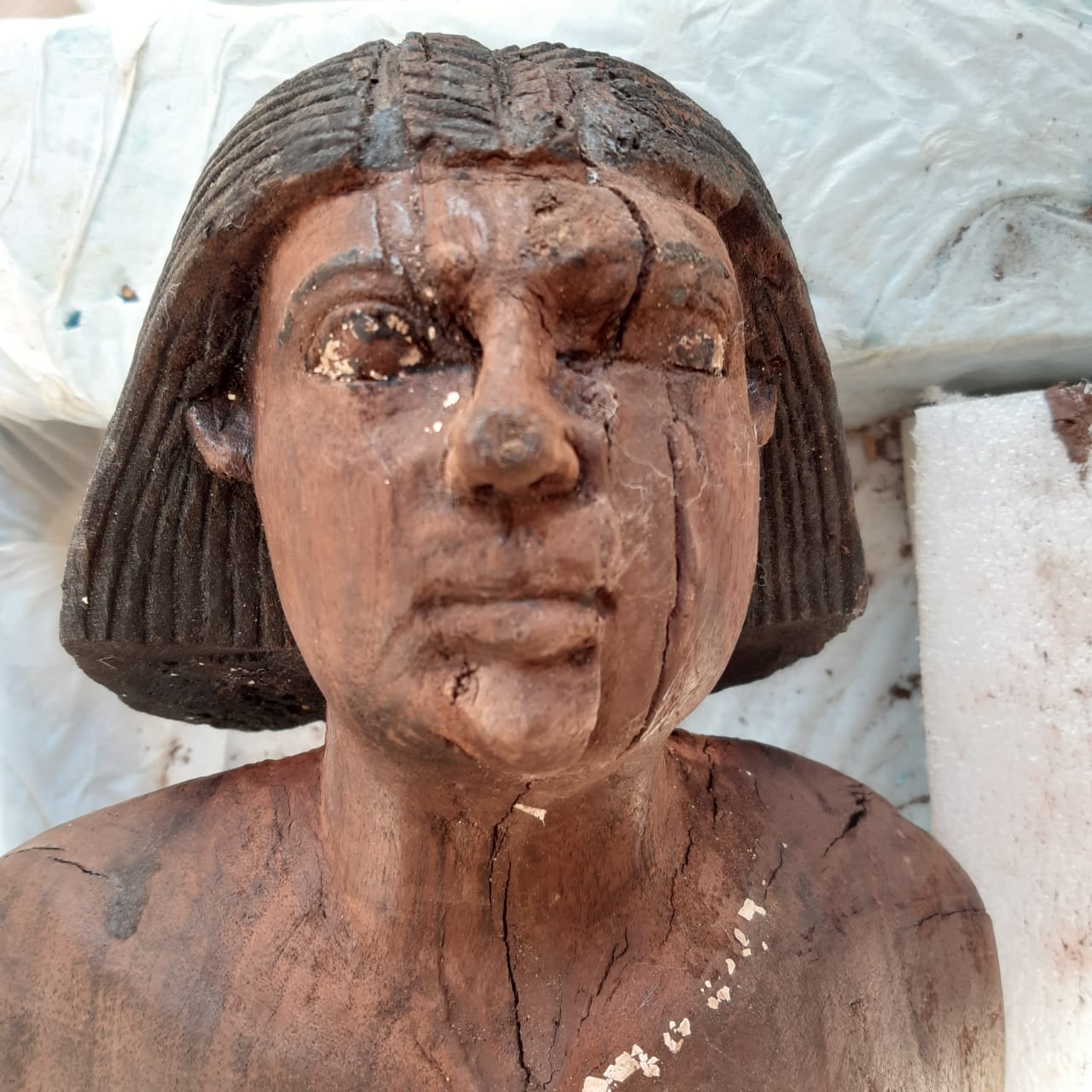 This important announcement was made by Egypt’s Minister of Tourism and Antiquities Khaled El Enany and Secretary General of the Supreme Council of Antiquities Mostafa Waziri in a massive press conference on November 14 attended by a number of public figures, local and international media and some foreign ambassadors to Egypt.


Saqqara is filled with so many discoveries and this only the beginning.

El Enany said that this is the third year Egypt announces archeological discoveries in Saqqara.

“ Saqqara is as important as the Pyramids of Giza as it houses the first Step Pyramid in the world” Enany added.

“ We have tombs and 40 impressive statues from three different shafts, some of these tombs will be going to the Egyptian Museum in Tahrir,which tomorrow is its 118th anniversary” Enany recounted.

“We are going to open the tomb in front of you today and X Ray the mummy too” said Waziri.

“ The tiniest details are taken care of and its face is very beautiful, in my opinion this mummy belong to the ptolemaic era” Waziri commented. Waziri added that there is a workshop for manufacturing coffins in Saqqara, but it has not been discovered yet, and the Egyptian mission will work to find it 2021.

The newly uncovered coffins which are all in good condition, are for senior statesman, and priests from the 26th Dynasty. This comes after the excavations have already uncovered 59 coffins.

The newly uncovered coffins were found inside new burial shafts that have not been opened at all and for 2500 years.

A number of wooden statues and colored and gilded masks were found as well in a very good condition.

In a press conference that was held on October 3 in Saqqara necropolis, Egypt’s Minister of Tourism and Antiquities Khaled El-Enany opened one of the Pharaonic coffins discovered in the ancient Saqqara area in front of a group of ambassadors and media representatives. 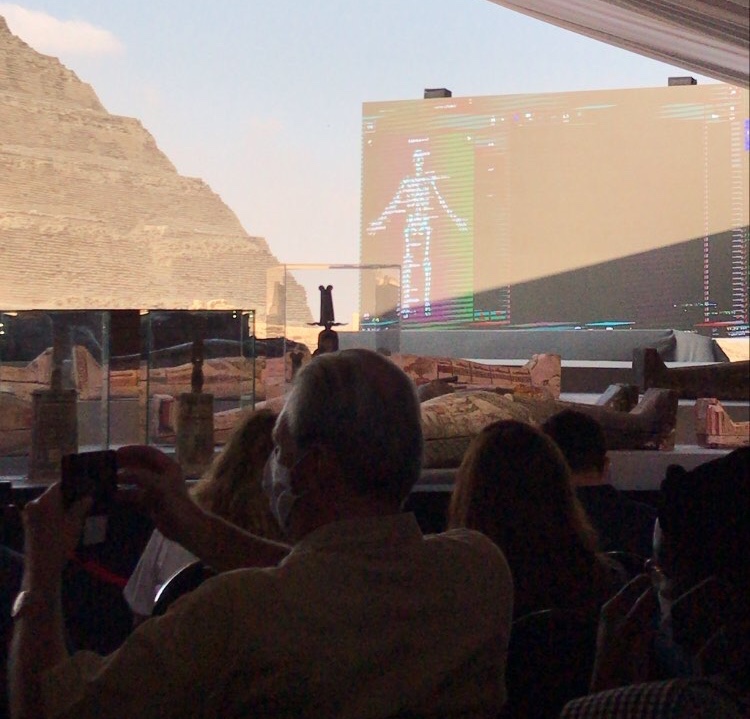 “Once we open this coffin, you will find that it was well sealed,” Enany said.

“Today we announce the biggest archaeological discovery in 2020, in the presence of foreign ambassadors from more than 43 countries and 200 media representatives to introduce to the whole world a new part of our great civilization,” Enanypreviously said.

Egypt's Minister of Antiquities and Tourism added that COVID-19 did not stop his colleagues from unearthing more treasures in the Saqqara necropolis.

Enany stressed that he is immensely proud of these discoveries that have been made by Egyptian teams on Egyptian soil.

“Today is not the end of this discovery, I consider it the beginning,” Enany stated, revealing that

the newly uncovered coffins will be transferred to the Grand Egyptian Museum to be displayed in the hall next to the one that contains the Asasif Cachette. 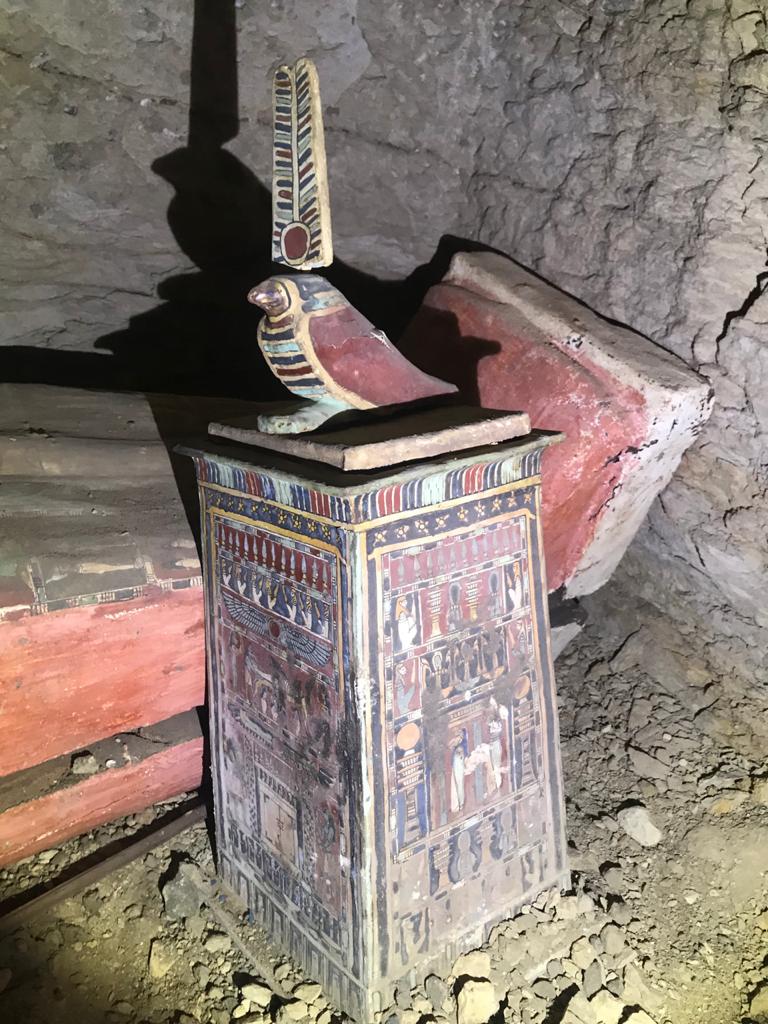 The majority of the coffins contain mummies.

Also, a group of 28 statuettes of Ptah-Soker, the main god of Saqqara Necropolis, as well as a group of amulets and ushabtifigurine were found.

The press conference held on October 3 was attended by acclaimed Egyptian Egyptologist Zahi Hawass who said to Secretary General of the Supreme Council of Antiquities Mostafa Waziri, “You brought me back to action.”

Moreover, the Egyptian archaeological mission headed by Secretary General of the Supreme Council of Antiquities Mostafa Waziry announced the discovery of a carved bronze statue of the god Nefertum in Saqqara necropolis.

It is 35 centimeters tall and has the name of its owner, BadiAmunis, engraved on its base.

Waziri said that the newly discovered bronze statue of the god Nefertum was found lying beside the 26th Dynasty coffins.

The secretary general of the Supreme Council of Antiquities said that the Nefertum statue is one of several statues that the mission discovered during the excavation work inside an 11 metre-deep burial shaft.

On September 6, Egypt’s Ministry of Tourism and Antiquities announced that more than 13 intact and sealed coffins were discovered in Saqqara, which is considered massive discovery. The discovered coffins were found inside an 11-metre deep shaft, where three sealed niches were also found.

"An indescribable feeling every time we witness a new archaeological discovery, especially when it is an 11-meter-deep shaft encompassing a number of sealed pharaonic human coffins. A wonderful feeling that we are revealing a new secret of our great civilization... Stay tuned for the announcement of a new discovery in Saqqara! A big thank you to all my colleagues in the ministry for their efforts and dedication," Minister of Tourism and Antiquities Anany said on September 6.

Waziri announced that the names of the coffin owners have not yet been discovered, but will be revealed the in the upcoming days as the excavation work continues.

The first studies revealed that these coffins are sealed and have not been opened since they were buried in the shaft, and that most probably they were found in the same location.

On September 18, a group of 14 intact wooden coffins were discovered four days ago in a burial shaft.

This burial shaft was found next to the shaft that was revealed last week and housed 13 coffins in Saqqara Necropolis.

The total number of intact coffins in the area has now reached 27; the coffins are 2,500 years old and still keep some of their original colours.

It is worth mentioning that Saqqara discovery houses the largest number of coffins in one burial since the discovery of Al-Asasifcachette.

On April 18, the Egyptian Ministry of Tourism & Antiquities announced via the internet a new archaeological discovery in Saqqara Necropolis.

Minister of Tourism and Antiquities Anani uploaded a set of photos of him with excavation workers in Saqqara on his official account on Instagram.

“This discovery is very important because it proves that Saqqara was the main burial of the 26th Dynasty,” Hawass added.

The discovery was a burial well leading to a room containing a large collection of statues, pottery, and Ushabtis, in addition to a sarcophagus.

This well was located next to the Wahty Tomb, which was discovered in November 2019 in the sacred cemetery of animals.

The statement of the Ministry of Tourism & Antiquities confirmed that work began in this promising region in April 2018, indicating that work is still underway.

The discovery was located at the site of the necropolis of sacred animals and birds in Saqqara, in which, during the past 2 years, many archaeological discoveries were made by the personnel of the Supreme Council of Antiquities.

In the same context, Netflix released the docu-feature “Secrets of the Saqqara Tomb”.

The new docu-feature was available only on Netflix on October 28.

“Secrets of the Saqqara Tomb” documents the discovery of the one of a kind tomb at the archaeological site Saqqara in Egypt.