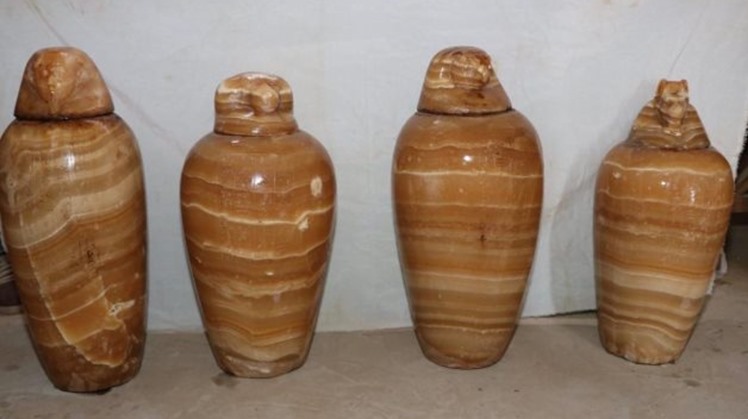 Sun, Oct. 25, 2020
The Egyptian archaeological mission working in the antiquities area of Al-Ghuraifah in Tuna al-Gabal, Minya Governorate, uncovered the tomb of the supervisor of ancient Egypt's royal treasury. Stone statues and other archaeological findings, all in good condition, were also unveiled.

Secretary General of the Supreme Council of Antiquities and Head of the Mission Mustafa Waziri explained that the cemetery consists of a burial well with a depth of 10 meters, leading to a large room with niches carved into the rock and closed with

Inside the room two limestone statues, one of the calf Apis and the other of a lady, were found. This is in addition to a group of the most beautiful canopic vessels made of alabaster in the form of the four sons of Horus, engraved with the titles and names of the deceased.

Waziri noted that the finding also include 400 ushabti statues of blue and green faience bearing the name of the deceased, six burials of the deceased’s family members containing about 1,000 faience statues, groups of canopic vessels made of polyester and limestone, as well as some amulets, scarabs, and a group of pottery vessels from the El-Sawy era.

Moreover, four stone sarcophagi in a human form, which were closed with mortar. Work is still undergoing to uncover more secrets and treasures from the Al-Ghuraifah area.

It is worth noting that the fourth season of excavations of the Egyptian archaeological mission in the archaeological area of Al-Ghuraifa in Minya'sTuna al-Gabal revealed a 5-meter deep burial well, with a coffin made of limestone that belongs to the chief priest of one of the ancient Egyptian deities.

The coffin is decorated with scenes representing the four children of Horus, in good condition. A group of ushabti statues made of vines were also discovered in the burial well.

During its previous three seasons, the archaeological mission has succeeded in uncovering many family cemeteries belonging to the high priests of one of the ancient Egyptian deities and senior officials in the fifteenth region of Upper Egypt and its capital, Ashmonin, in addition to 19 cemeteries containing 70 stone sarcophagi of different sizes and shapes and funerary furniture.