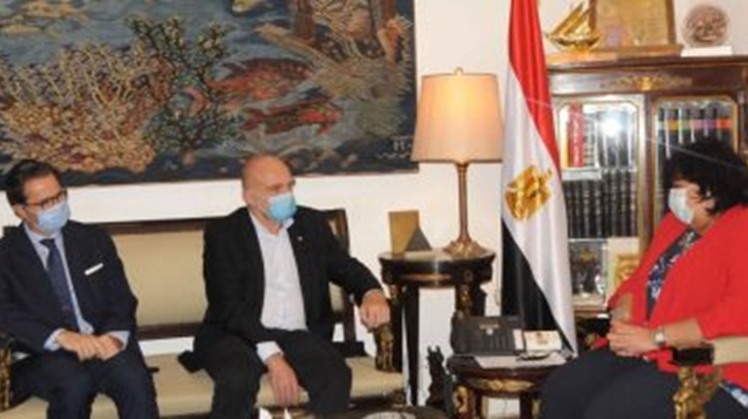 Thu, Oct. 1, 2020
Dr. Inas Abdel-Dayem, Minister of Culture, Staffan Romate, received the French Ambassador in Cairo, and Frédéric Boutet, a representative of the French National Assembly and a member of the French Parliament, to discuss ways to support cultural and artistic cooperation between the two countries.

Inas Abdel Dayem said that soft power is one of the means of consolidating friendship bonds and a bridge for communication between peoples, and the strength and depth of relations between Egypt and France, pointing to the richness of creativity in the European country at the historical and contemporary levels, and the emotional and cultural convergence between the two friendly societies.

The Minister of Culture added that it was agreed on the need to enhance intellectual and artistic exchange between the two countries during the coming period in various creative fields, stressing the importance of expanding plans for the exchange of artistic and educational missions.

For his part, the French ambassador said that his country hopes to continue the creative movement with Egypt in all artistic and cultural fields, which is a pillar of friendship between the two countries, referring to the role of the French Cultural Center in Cairo in their cooperation, and he expressed his happiness with the French participation in the various international forums organized by Egypt, including Cairo International Book Fair and Cairo International Film Festival.

The French ambassador also invited the Minister of Culture to visit Paris and meet her French counterpart, Roselyn Bachelot, who is known for her love of Egyptology and classical music.

At the end of the meeting, the ambassador presented the French Parliament commemorative medal to the Minister of Culture, who gave him a group of publications of the Ministry of Culture.