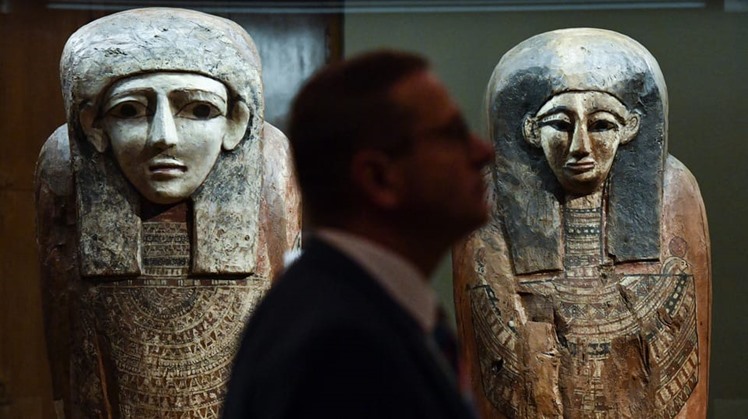 Wed, Sep. 9, 2020
The National Museum in Prague opened perhaps its most significant exhibition yet on Sunday. Under the title “Kings of the Sun” it depicts the age of the pyramid builders in Ancient Egypt and features a priceless collection of nearly 300 never-before-seen objects, 90 of which have left Egypt for the first time.

Priceless artefacts from the Ancient Egyptian Old Kingdom are now on display at the Old Building of the Czech National Museum, after the special exhibition was ceremoniously opened on Sunday.

The head of the Czech Institute of Egyptology, Miroslav Bárta, says the exhibit primarily focuses on the kings of the Fifth Dynasty, which immediately followed the builders of the great pyramids around Giza.

Photo: ČTK/Šimánek Vít Photo: ČTK/Šimánek Vít
“This dynasty, the fifth, lasted roughly about 150 years from the 25th to the 24th century BC. Four kings of that dynasty were buried in Abusir. They built beautifully decorated mortuary complexes that consisted of several major elements such as a Nile Valley causeway, the mortuary or cult temple and their respective pyramids.”

Aside from royalty, the exhibition also features dozens of artefacts belonging to court officials of the Fifth Dynasty kings as well as objects from later Ancient Egyptian periods, such as that of Ramesses II and Greek papyri from the Hellenistic period.

The exhibit was decades in the making, says National Museum Director Michal Lukeš.

“In a way, we kind of broke our own ‘curse of the pharaohs’, because generations of Czech archaeologists had been dreaming about it.

“When we were moving the objects, professor Verner, the famous Czech archaeologist, told us that the exhibition had been prevented twice by revolution – first the Velvet Revolution of 1989 and later the Arab Spring.

“Now we have managed to go ahead despite difficulties in moving the artefacts during the coronavirus pandemic, so hopefully that curse of the Pharaohs has been broken and the exhibition will be successful and visited by many people.”

Moving the objects, insured at CZK 1 billion, between two continents at a time of strict quarantine measures was indeed no easy task, as Michal Stehlík, the museum’s deputy director general for collection-building and exhibitions explains.

“One [COVID-19] test in Cairo, a second in Frankfurt, a third in Prague... It is also difficult to organise the visa policy during the coronavirus period with all the special conditions at the various embassies, ministries of health, interior and so on.

“There was a whole system on how to prepare the trip of the curators from Cairo to Europe. That was the main problem.”

Photo: ČTK/Šimánek Vít Photo: ČTK/Šimánek Vít
What helped was the ‘special relationship’ of sorts between Czech Egyptologists and their Egyptian counterparts, established through Czech archaeological contributions to our understanding of Ancient Egypt. In fact, the main focus of the exhibition – on the Fifth Dynasty kings and their officials – is based around digs and discoveries of Czech Egyptologists around the Abusir necropolis near Cairo.

Egypt’s minister of antiquities and tourism, Dr Khaled al-Anany, says that the Czech-Egyptian relationship in the field of Egyptology goes far back indeed.

“The Czech Republic is a very old and strong partner of my ministry, since the 1960s. We are now celebrating 60 years of partnership in the archaeological field. I am very happy that we did it.

“We are sending 90 artefacts coming from the excavations of long [time] archaeological missions between the Czech Republic and Egyptian teams.

“These objects are far beyond just stones. They tell the story of a great civilisation. They are the witness of a strong partnership between Egypt and the Czech Republic.”

Aside from artefacts belonging to the Egyptian Museum in Cairo and the soon to be opened Grand Egyptian Museum in Giza, the National Museum exhibit also features objects lent from several museums in Germany. The exhibition is open until February 7, 2021.