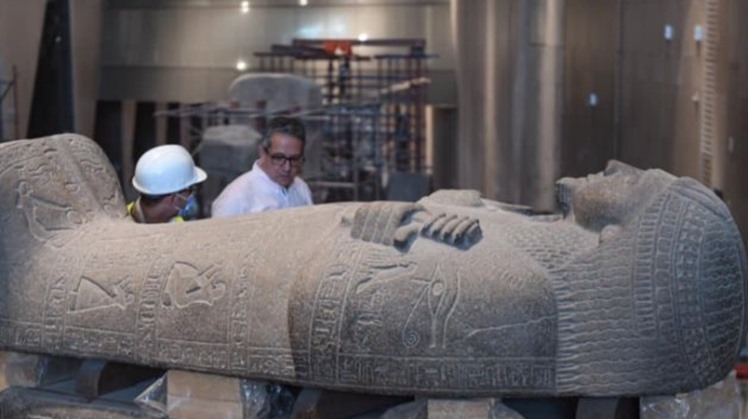 Wed, Sep. 9, 2020
On September 8, Egypt’s Minister of Tourism & Antiquities Khaled el-Anani inspected the Grand Egyptian Museum in El-Remaya Square to follow up on the developments of the museum’s exhibiting scenario.

During the tour, Anani was accompanied by General Supervisor of the Grand Egyptian Museum and the surrounding area project Atef Muftah, Secretary-General of the Supreme Council of Antiquities Mostafa Waziri, Director General of archaeological affairs at the museum Al-Tayeb Abbas, and Issa Zaidan, director general of executive affairs for the restoration and transfer of antiquities at the museum.

The inspection tour included the lobby, the great staircase and the exhibition halls of the treasures of King Tutankhamun.

During the tour that lasted 3 hours, the minister praised the efforts exerted by the museum's work team to transfer, install and display the artifacts, stressing that the team has taken care of the smallest details to enrich the exhibiting scenario and highlight the beauty of the ancient Egyptian civilization.

It is worth noting that the Grand Egyptian Museum is the largest museum of antiquities dedicated to one civilization, the ancient Egyptian civilization.

For the first time, all the personal belongings of King Tutankhamun, which exceed 5,000 pieces, will all be housed in one place, the GEM. This is in addition to housing a number of artifacts that date back to various ancient eras from prehistoric times to the Greek and Roman eras.