Urgent meeting .. What is going on with the transfer of Khufu to the Grand Museum? 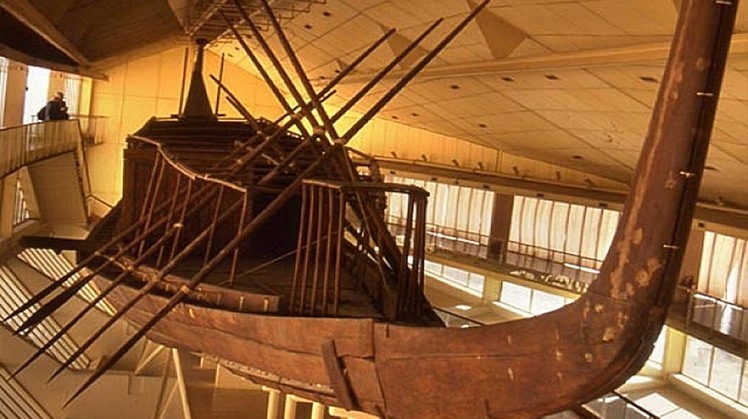 Tue, Jul. 21, 2020
Despite the conditions that the world, including Egypt, is going through from the outbreak of the new Corona virus, the Ministry of Tourism and Antiquities is working to complete open archaeological projects, while taking precautionary measures to confront the virus, and among these projects is the process of transferring the second Khufu complex to the Grand Egyptian Museum. .

There are 3 national companies that will take over the transportation of the first Khufu boat, where the design of the building for the boats in the big museum is currently being completed, in conjunction with the work of moving the boat.

Major General Atef Moftah revealed, in previous statements for "The Seventh Day", the reasons that made him consider moving the first Khufu boat from its current location to the Grand Museum, which is that the building where the boat is currently displayed, which was established more than a quarter of a century ago Significantly helped to eliminate the southern rib of the most important impact in the world, which is the Great Pyramid, which clearly worked on visual distortion of the archaeological area, as well as the presence of the boat in a building that lacks a distinct display style and is not qualified to receive people with special needs.

Major General Atef Moftah added that the idea of ​​transporting the first boat is not a result of today, but it started a long time ago and ended with the idea being presented to President Abdel Fattah El-Sisi, on May 28, 2019.

Major Atef Moftah explained that one of his most important priorities in the transportation process is how to secure the boat in a proper scientific manner, which made him work 6 months before presenting the idea of ​​transporting the boat to prepare a workshop and several meetings to study the most appropriate scientific solutions for transporting the boat in a way that guarantees its safety during packaging and transportation. He explained that the method and locations for dismantling and re-installation have been determined, and that the most important stage of transportation for him is to maintain and control the temperature, humidity and intensity of illumination throughout the work period so that the boat is not affected.

He continued that he had developed a new engineering design for the building in which the King Khufu complex will be displayed first and second, in a manner that depends on observing the accuracy and distinctive scientific style in the museum display.

With regard to the second Khufu complex, restoration work is continuing inside the second Khufu compound, while adhering to all directions of the Egyptian government to reduce the number of employees, to prevent a further outbreak of the Corona virus, as forced rules were imposed on all workers at the site, along with continuous sterilization procedures on a daily basis.

Also, the team working on the boat project has succeeded so far in extracting approximately 1272 pieces of wood from the boat, in addition to finding a knife made of buttons and a very pillar made of copper.

The Japanese-Egyptian work team uses the three-dimensional imaging technology in documenting the wooden pieces of the second Khufu compound, after completing the first restoration work for them and this technique reflects one of the best methods used in documentation work, where details are given in very accurate and clear and through which the piece can be seen from all Directions This is to depict all the pieces as a prelude to assembling the composite parts on computers before they need to be assembled according to reality and nature, thus fading to errors when assembling.