Can we prove that Ramses II is the Pharaoh of Egypt? Zahi Hawass answers 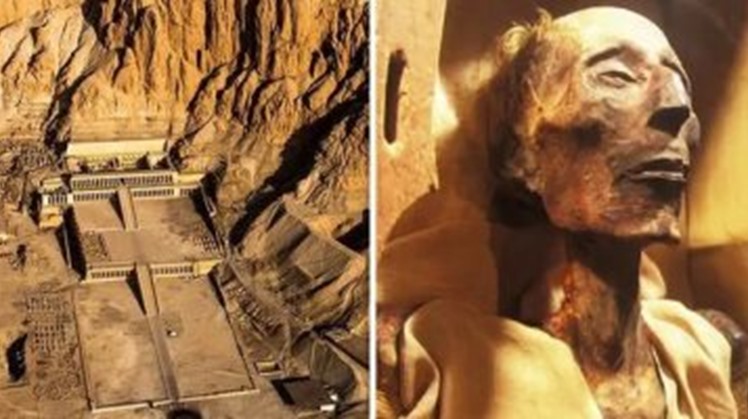 Thu, May. 14, 2020
Warden Dr. Ali Gomaa raised a state of controversy after he said in his program that he presents on Egypt First Channel, the day before yesterday, that when tests were carried out on the body of Ramses II, they found that he died of sphincter strangulation caused by drowning, and found some seaweed inside to confirm that this is Pharaoh Moses, so can we really know that the mummy of Ramses II is the same as that of Pharaoh of Egypt?
The archaeologist, Dr. Zahi Hawas, had reviewed this matter during his speech on a symposium held by "the seventh day", specifically on December 20, 2019, when he asked him several questions in this regard.

So the first question was about the Egyptian project to study the royal mummies ?, Zahi Hawas answered, saying: The studies were conducted by foreigners over the past years, and they took parts from them. Whoever conducted the Xray rays of Tutankhamun’s mummy stole part of the mummy, and who conducted research on the mummy of Ramses The second was to prove whether or not Pharaoh Musa stole his hair, but the hair was restored again.


As for the second question, when was the project of studying the royal mummies started ?, Dr. Zahi Hawass explained, "We started in the project in 2009, and we made huge discoveries, including the mummy of Queen Hatshepsut, and how Ramses II and the family of King Tutankhamun died, and we are now conducting studies on 20 royal mummies. "

In the third question, about the civilized form in which the mummies will be displayed ?, he sensed that the mummy will display alongside all the statues that belong to it, in addition to evidence or data explaining what the mummy owner did, and the results of «DNA» and CT scans, which appear How he died and whether he was sick or not, just as we discovered that "Ramses V" was sick with smallpox, and all of these things will be beside every mummy.

From the context of the foregoing, it was self-evident that we ask whether CT scans prove the causes of death? Is it possible to discover whether Ramses died as drowning, as the authors of the theory claim that he was Pharaoh Moses ?, And in this regard, which is the focus of our conversation due to what the great scientist mentioned on Friday, then Dr. Zahi Hawass, the archaeologist, responded by saying: It is not possible through CT scans to know that The mummy died by drowning, the only thing that proves this is the lung which is not present inside the mummy, and when they took the mummy of Ramses in the eighties, in order to prove that Pharaoh came out, one of the researchers stole his "hair of his head" on the restoration trip in France, and put him in the treasury of his house and after His departure his son tried to sell him.