The Voice of Mummified Egyptian Priest Heard After 3,000 Years Through Technology 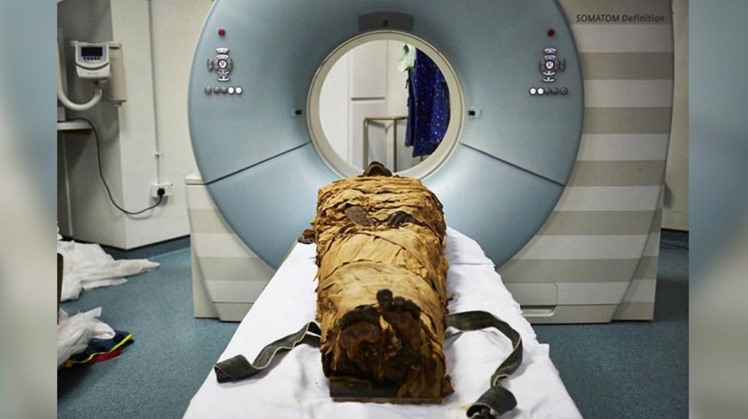 Sun, Jan. 26, 2020
The voice of an ancient Egyptian priest has been heard for the first time in more than 3,000 years, thanks to a detailed reconstruction of his vocal tract from his mummified remains.

The project researchers used interior medical scans of the famous mummy of Nesyamun — now resting in the Leeds City Museum in the United Kingdom — to create a digital, 3D model of the insides of the individual's throat and mouth, which were reproduced on a 3D printer.

The 3D-printed vocal tract was then combined with an artificial larynx to recreate a single sound from Nesyamun's voice — a sound not heard since the 11th century B.C.


The researchers said the sound is a "fundamental frequency" of Nesyamun's voice, lying somewhere between the vowel sound in the English words "bed" and "bad."

But determining how Nesyamun's voice sounded was complicated by the position of the head of his mummy and its deterioration over time, the researchers said.

"Nesyamun's vocal tract posture is not set for speaking any specific vowel; rather it is set appropriate for his burial position," the researchers wrote in Scientific Reports. "In addition, his tongue has lost much of its muscle bulk, and his soft palate is missing."

Previous efforts to reproduce ancient voices could only approximate them, by animating facial reconstructions with software. In comparison, the sound of Nesyamun's voice is based on "an extant vocal tract preserved over three millennia," the researchers wrote.

He rose to the high rank of "waab priest" at the temple complex at Karnak, near Luxor in Upper Egypt, on the east bank of the Nile River. That meant he was permitted to approach the statue of Amun, then the foremost of the ancient Egyptian gods, in Karnak's sacred inner sanctum.


Nesyamun is thought to have died in his late 50s from a severe allergic reaction. Almost 3,000 years later, his mummy was discovered at Karnak and transported to the Leeds City Museum in 1823. His remains and ornate coffin have since become some of the world's best researched relics of ancient Egypt.

Nesyamun's mummy was a good choice for studying the sound of an ancient voice, said David Howard, the lead author of the new research and a professor of electronic engineering at Royal Holloway, part of the University of London.

"It was particularly suited, given its age and preservation [of its soft tissues], which is unusual," Howard told Live Science.

He said he hopes the scientific understanding of how human voices are created can be combined with knowledge of the ancient Egyptian language to reconstruct longer passages of Nesyamun's speech.

Before examining the mummy, the researchers had to deal with ethical concerns related to examining a person without their consent. They used nondestructive research methods, and took into account inscriptions on his coffin, relating that Nesyamun hoped again to "to address the gods as he had in his working life."

The researchers interpreted that to indicate his desire to speak again after death. "We are in a way fulfilling his declared wishes," Howard said.

Howard and Schofield said they hope a reconstruction of Nesyamun's speech, perhaps reciting an ancient Egyptian prayer, can be featured at the Karnak temple in Egypt for modern tourists.

"When visitors encounter the past, it is usually a visual encounter," said Schofield. "With this voice, we can change that."