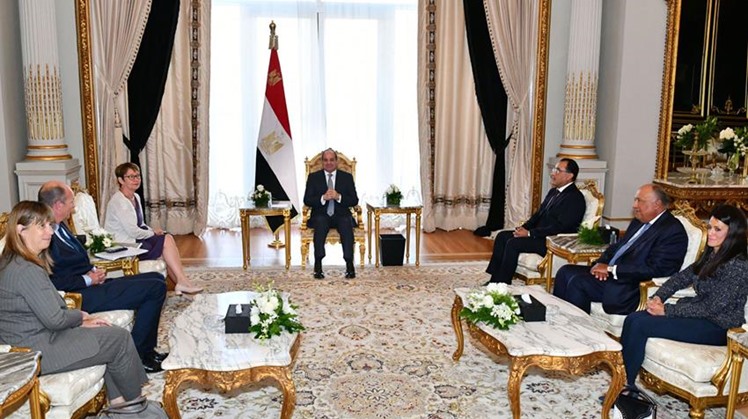 The official spokesman for the Presidency of the Republic stated that the President welcomed the President of the EBRD, stressing Egypt's appreciation for the distinguished relations with the Bank, especially in light of the important role the bank played during the past years as a partner in the success of the development process in Egypt.

President Sisi expressed his aspiration to explore more areas of cooperation with the EBRD in light of the comprehensive and sustainable development process being implemented in the country at the economic and social levels, especially in the areas of clean energy, and support for the transition to a green economy, especially in light of the Egyptian presidency of the World Climate Summit COP27, and in In light of the global momentum on the issue of climate change.


For her part, the President of the European Bank for Reconstruction and Development stressed the Bank's pride in the strong cooperation relations with Egypt and its various financial institutions, praising the success of Egyptian efforts to achieve economic reform, and then the European Bank's keenness to enhance cooperation with Egypt, especially with regard to matters relating to financing green transformation projects.

The official spokesman added that the meeting discussed ways to enhance cooperation with the European Bank, and work to increase its contribution to financing projects implemented in Egypt, in light of the adoption of the new strategy for cooperation between the two sides, especially with regard to new and renewable energy projects.

Egypt International Forum (Egypt-ICF2022) and African Ministers of Finance, Economy and Environment Meeting for the COP27 kicked off on Wednesday at the New Administrative Capital.


Basso delivered a speech during the opening session of the Egypt-ICF2022 where she announced that EBRD only started working in Egypt 10 years ago, noting that since then the EBRD has invested almost $10B in Egypt across a very wide range of sectors.

"The EBRD helped Egypt green its economy and generate growth and opportunities for its citizens across the country," she added.

According to Basso, the EBRD recently approved a country strategy that has three main priorities at its heart: the promotion of a more inclusive economy for Egyptian businesses, women and youth, accelerating Egypt’s green transition and enhancing Egypt’s competitiveness.

EBRD’s support to the Egyptian government in implementing the energy pillar of the national platform of Nexus of Water, Food, and Energy platform (NWFE) program.

President of the EBRD highlighted the key features of support presented by her bank to energy pillar which include the closure of old gas-fired capacity and the delivery of a just transition, the ambitious and rapid development of renewable generating capacity, exploiting Egypt’s world-class solar and wind resource, and the targeted deployment of public money to unlock massive private investment.

According to Basso, NWFE is important as it brings together those vital development goals of water, food and energy.

On the recently approved Climate Country Strategy, Basso stated that it has three main priorities that include the promotion of a more inclusive economy for Egyptian businesses, women, and youth, accelerating Egypt’s green transition, and enhancing Egypt’s competitiveness.

For his part, President Sisi said during his participation in the Egypt-ICF2022 that the forum underlined the growing interest in the climate change issue, noting that the issue is part of the priorities of the Sustainable Development Agenda.

He said the environmental dimension is the main axis for all development sectors.

He noted that the annual cost for alleviating the climate change impact by 2025 stands at about $800 billion.

President Sisi said Egypt is implementing programs to become number one at the international level in the water treatment domain.

He said the tri-treatment mechanism goes in line with the World Health Organization standards.

Sisi noted that there is a mega national project for benefiting from each drop of water.

He added that Egypt has mammoth programs for new and renewable energy in order to minimize the use of the stations depending on fossil fuel.

"We have a chance for generating tens of thousands of megawatts from solar and wind energies," the president Sisi, noting that great progress was made in producing green hydrogen.

President Sisi said the 2050 national strategy for climate action focuses on food, water and energy security, referring also to the launch of the NWFE platform to mobilize finance in collaboration with the international partners concerned with the climate issue.

He noted that the New Administrative Capital (NAC) is part of a grand Egyptian program for 4th generation smart cities with low-carbon emissions.

He said that Egypt plans to up its green investments from 40 percent to 50 percent of the total state investments by 2023-2024.

Sisi lauded the development partnership between Egypt and the EBRD, voicing hope for more cooperation in the coming period.

Core objectives of the Egypt-ICF 2022 include ensuring the coherence between the situation of the African climate financing with the continent actual needs, giving the priority to for the procedures that African countries can execute with supporting increasing the climate finances, and showcasing the successful development experiences while supporting the fresh initiatives and the doable policies in terms of climate adaptation and mitigation.