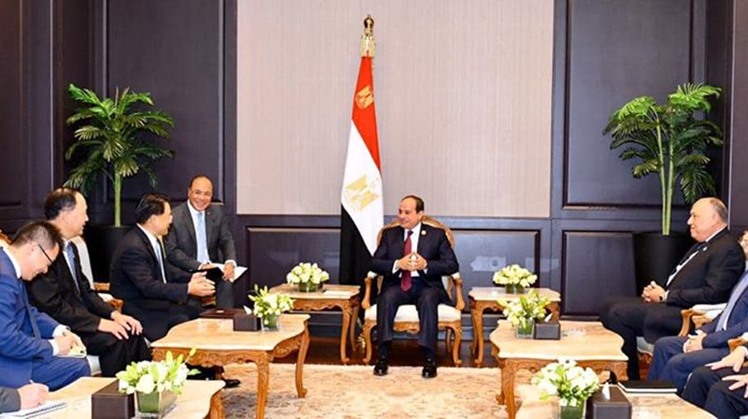 Mon, Dec. 16, 2019
CAIRO - 16 December 2019: Egypt has always backed the efforts and projects of industrial development in Africa, identified development gaps that should be treated, and worked to attract donors to back them, UNIDO director-general said.

As he met with President Abdel Fattah el-Sisi on Monday morning, on the sidelines of the World Youth Forum in South Sinai’s Sharm El Sheikh, Director General of the United Nations Industrial Development Organization (UNIDO) LI Yong referred to the developmental boom Egypt has witnessed recently, the Egyptian Presidency said in a statement.

Yong said praised President Sisi, saying that he has been one of the main figures who positively reacts with the activities of UNIDO, concerning the implementation of the Third Industrial Development Decade for Africa (IDDA III).

For his part, President Sisi affirmed Egypt’s commitment to the success of the partnership program with UNIDO as an integral part of the national reform program and regional integration program, through coordinating between the UN agency and the relevant state institutions, Egyptian presidential spokesperson Bassam Radi said in a statement.

Sisi expressed appreciation for the work of UNIDO, in light of the growing and extending cooperation with Egypt in terms of the comprehensive and sustainable industrial development.

The president also expressed keenness to deepen cooperation in many areas between the two sides, especially through UNIDO's support for small and medium-sized projects in Egypt and enabling them to apply quality standards in order to achieve sustainability and access to markets, as well as its support in fields such as food safety.

The third edition of the World Youth Forum kicked off on Saturday in the Red Sea resort city of Sharm el Sheikh, with the participation of around 7,000 attendees from around the world, according to state’s news agency MENA. It is set to conclude on Tuesday.