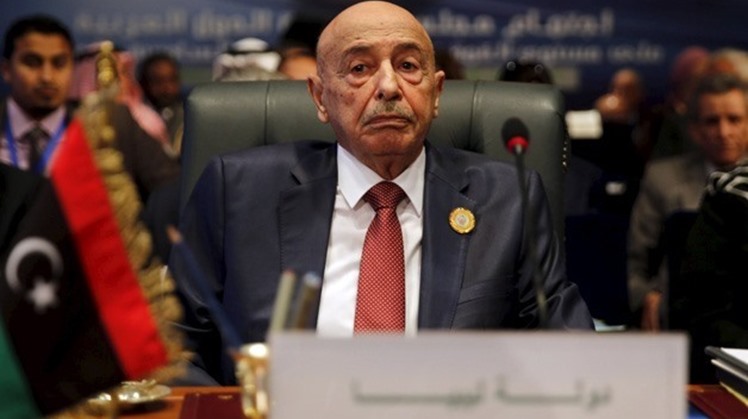 In an Interview with Egypt’s Middle East News Agency, Saleh said that the Libyan Parliament is the only authority elected by the Libyans, and that they are officially calling on Egypt to militarily intervene in Libya, in case it was necessary to preserve both of Libyan and Egyptian national security.

“Such action will be a legitimate self-defense if the terrorists and armed militias crossed the red line President Sisi spoke of during his last speech,” Saleh explained.

During a visit to the Western Military Zone on June 20, President Sisi highlighted the latest updates regarding Libya’s political crisis. He said that direct intervention by Egypt in Libya has become legitimate in line with UNSC resolutions, and upon the call of the legitimate authority in Libya.

"If Egypt had illegitimate goals in Libya, we would have intervened years ago. We would not accept it that history documents that we intervened in time of Libya's weakness…Jufrah and Sirte are a red line…The current line must be maintained. The party that does not respect it will attain neither the west nor the east. The political process must go forward," Sisi affirmed.

In his statements, Saleh explained that if militia violated Sirte, we will request the intervention of the Egyptian Armed Forces to support the Libyan army, as they will be protecting both of Egypt's and Libya’s national security.

Saleh said that Sisi’s speech was not biased towards a certain party over the other. "We don’t consider Egypt’s intervention as a bias for one party over the other; on the contrary, Sisi has always been calling for negotiations and a dialogue that would lead to reaching a political and peaceful solution,” Saleh explained.

Saleh referred to Cairo Declaration that was announced by Sisi on June 6 to push for a ceasefire in the war-torn country. The declaration was completely and fully supported by Libyans according to the parliament speaker.

“Sisi’s political stances will never be forgotten by Libyans,” Saleh said, thanking President Sisi and Egyptians for the key role they play in the crisis. He also highlighted the long and historical relations between Egypt and Libya.

Answering a question on the Libyan army's movement from Tripoli, Saleh clarified that the army moved after Turkey had sent more than 15,000 mercenaries into the Libyan capital. Therefore, the army moved in response to international calls for a ceasefire and according to international initiatives including the Cairo Declaration Initiative that was announced by President Sisi.

He affirmed that the most important article in the declaration is the ceasefire, which has been an international and Egyptian demand during the past period; however, always refused by certain international parties and a number of Libyans who have personal interests.

Regarding the international community stance on the recent developments in Libya, Saleh said that there is a major international agreement that Cairo Declaration is the only solution to end the Libyan crisis.

“Let’s stop this war, enough fighting. We have the capability to resolve the problems, but apparently the external direct and indirect interference undermines all our efforts. I call on all of you to stop the bloodshed in our country,” Saleh said addressing Libyans.

On June 6, President Abdel Fatah al-Sisi announced Cairo's plan for a ceasefire in Libya, after a tripartite meeting with Commander of the Libyan National Army (LNA) Khalifa Haftar and Speaker of Libyan Parliament Aquila Saleh.

Sisi said that the political initiative, which he called the “Cairo Deliration” would pave the way for a return to normal life in Libya. President Sisi warned against using military tactics to resolve the crisis.

"A political solution is the only way to resolve the crisis in Libya," Sisi said, adding that Libya's security is a pillar for Egypt's security.

"All Libyan parties have been asked to partake in the ceasefire," Sisi stressed, adding that LNA Chief Haftar and Parliament Head Aquila Saleh are committed to protecting the Libyan people’s best interests.

"Under the guidelines of the ceasefire, all foreign fighters must withdraw from Libya," he added.

For his part, Field Marshal Haftar said that the Turkish intervention in the Libyan conflict reinforces the aggravation of the situation in Libya and threatens stability.

Haftar pointed out that the whole world is witnessing Turkey's support for terrorism and the transfer of terrorist elements from one place to another in the Middle East and North Africa, which further complicates the Libyan crisis. Haftar emphasized the importance of Libya's unity and territorial integrity and the elimination of terrorist groups classified by Security Council resolutions, as well as calling for a Libyan dialogue immediately with the participation of all segments of the people.