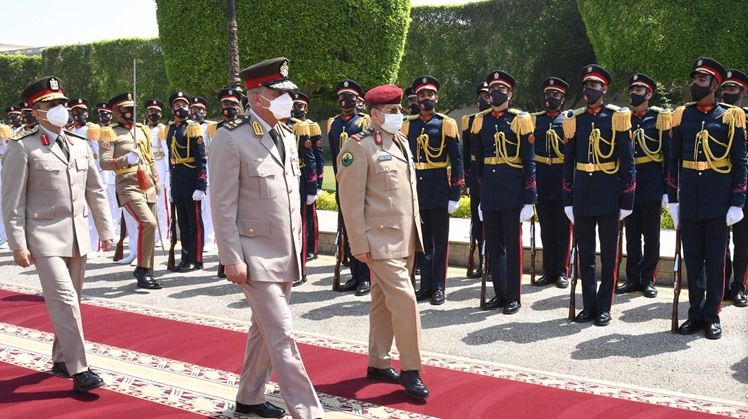 His remarks were made in a meeting with Egypt’s Defense Minister Mohamed Zaki as Maqdashi has arrived in Egypt in an official visit, during which he also met with President Abdel Fattah El-Sisi.

During their meeting, Maqdashi affirmed to Zaki his aspiration that the future period witnesses further cooperation in a way that achieves the joint interests of both sides, a statement by the Egyptian military spokesman read.

Maqdashi stressed his deep appreciation of the Egyptian Armed Forces’ efforts in all fields and Yemen’s keenness to boost military cooperation horizons with Egypt during the coming period.

Zaki, for his part, voiced appreciation of the firm historic relations between the Egyptian and Yemeni armed forces.

He also highlighted the consensus in the visions of the political leaderships of both countries toward supporting security and stability in the region.

The meeting discussed the latest developments at the regional and international levels as well as issues of mutual concern. This included transferring expertise and military cooperation between the two countries.

Chief of Staff of the Egyptian Armed Forces Mohamed Farid, a number of army commanders from both countries as well as the Yemeni ambassador in Cairo and the Yemeni military attache attended the meeting.

Meeting with Maqdashi on Monday, Sisi asserted Egypt's stance on backing all endeavors aimed at accomplishing a political solution in Yemen.

This comes in order to maintain the country's stability and territorial integrity as well as fulfill the ambitions and free willpower of the Yemeni people against all foreign interferences in their internal affairs.

The president added that the aforementioned are the principles and bases of the Egyptian policy and that Egypt would not spare any effort to help Yemen attain those goals.

Maqdashi delivered the greetings of Yemeni President Abdrabbuh Mansur Hadi, valuing cooperation ties between Egypt and Yemen in all sectors, particularly the military and security ones.

The minister added that his country looks forward to continuous support by Egypt for political endeavors targeted at containing the situation in Yemen and ending its humanitarian crisis.

In turn, the president asked Maqdashi to deliver his greetings to the Yemeni president.