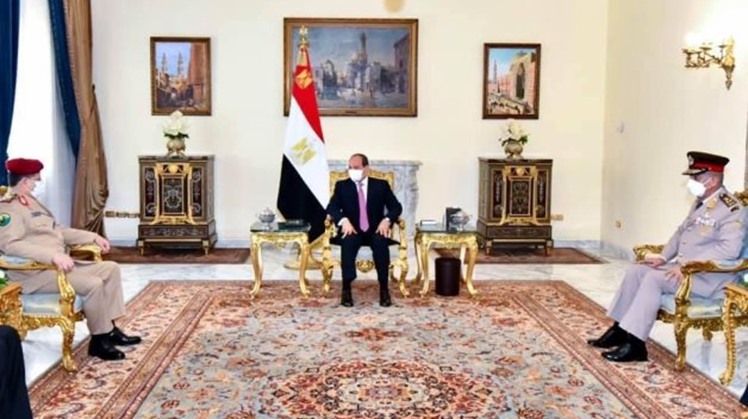 Mon, Sep. 20, 2021
CAIRO – 20 September 2021: Egypt's President Abdel Fatah al-Sisi asserted Monday Egypt's stance on backing all endeavors aimed at accomplishing a political solution in Yemen in order to maintain the country's stability and territorial integrity as well as fulfill the ambitions and free willpower of the Yemeni people against all foreign interferences in their internal affairs.

The president added, in his meeting with Yemeni Minister of Defense Mohamed Ali Maqdeshi, during his visit to Egypt, that the abovementioned are the principles and bases of the Egyptian policy and that Egypt would not spare any effort to help Yemen attain those goals.

Maqdeshi delivered the greetings of Yemeni President Abdel Rabo Mansour Hady valuing cooperation ties between Egypt and Yemen in all sectors, particularly the military and security ones. The minister added that his country looks forward to continuous support by Egypt for political endeavors targeted at containing the situation in Yemen and ending its humanitarian crisis.

In turn, the president asked Maqdeshi to deliver his greetings to the Yemeni president.

The meeting was attended by Egyptian Minister of Defense and Military Production Mohamed Zaki, and Yemeni Ambassador Mohamed Ali Marem.