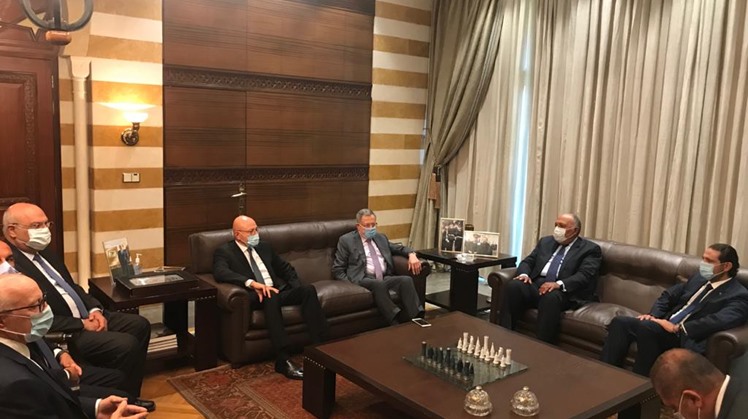 Shoukry discussed the current political situation in Lebanon with the former Lebanese premiers during their meeting.

The visit comes as President Abdel Fattah al-Sisi expressed strong keenness on helping unstable Lebanon. He took part on Sunday in a virtual donors’ conference co-hosted by French President Emmanuel Macron and the United Nations, with the aim of obtaining aid for Beirut.

Shoukry visited the Egyptian field hospital in Beirut, where he was given full explanation of the healthcare services it provides it the Lebanese people at this troubled time.

Shoukry praised the role the hospital plays, especially that it has received people who were injured in the port explosions last week, and that it’s services are free of charge for everybody in Lebanon.

Ahead of the visit, Shoukry was received at Baabda palace by President Michel Aoun. The minister expressed Egypt’s keenness on working with Lebanon on its priorities in coordination with the Lebanese authorities. In a phone call with Maronite Patriarch Bechara Boutros Al-Rai, Shoukry said Egypt will help Lebanon in every way possible.

In a short press conference, Shoukry said that “accumulations led to lots of suffering in Lebanon,” emphasizing the sovereignty and stability of the country.

He called for “a political framework that can face this crisis and guarantee the stability and unity of Lebanon, as well as distance it from regional disputes” to avoid their impact on the country.

He also called for prioritizing the needs of the Lebanese people, reconstructing the country and facing humanitarian challenges.