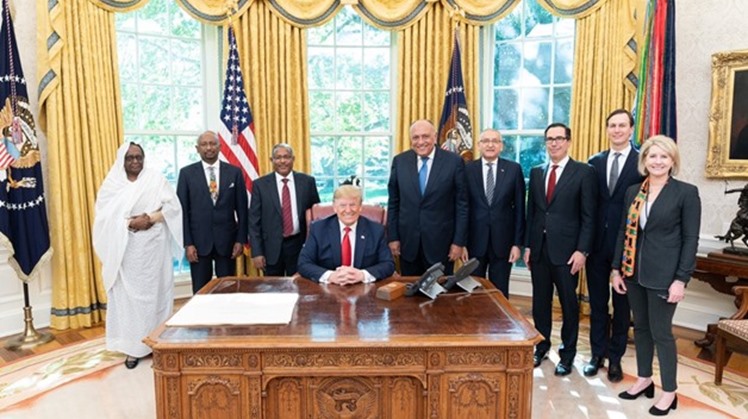 Thu, Nov. 7, 2019
CAIRO – 7 November 2019: The foreign ministers of Egypt, Ethiopia and Sudan and their delegations held a meeting with the Secretary of the Treasury and the President of the World Bank in Washington, D.C. on Wednesday.

During the meeting, the ministers reaffirmed their joint commitment to reach a comprehensive, cooperative, adaptive, sustainable, and mutually beneficial agreement on the filling and operation of the Grand Ethiopian Renaissance Dam (GERD) and to establish a clear process for fulfilling that commitment in accordance with the 2015 Declaration of Principles.

The foreign ministers noted their agreement to hold four technical governmental meetings at the level of water ministers.

The ministers agreed that the World Bank and the United States would support and attend the meetings as observers.

US President Donald Trump tweeted, “Just had a meeting with top representatives from Egypt, Ethiopia, and Sudan to help solve their long running dispute on the Grand Ethiopian Renaissance Dam, one of the largest in the world, currently being built.

“The meeting went well and discussions will continue during the day!”

Just had a meeting with top representatives from Egypt, Ethiopia, and Sudan to help solve their long running dispute on the Grand Ethiopian Renaissance Dam, one of the largest in the world, currently being built. The meeting went well and discussions will continue during the day! pic.twitter.com/MsWuEBgZxK

The ministers also agreed to work toward completion of an agreement by January 15, 2020, and would attend two meetings in Washington, D.C. on December 9, 2019 and January 13, 2020, to assess and support progress.

If an agreement is not reached by January 15, 2020, the foreign ministers agree that Article 10 of the 2015 Declaration of Principles will be invoked.

Egyptian President Abdel Fattah El-Sisi said in earlier remarks that Egypt has always shown openness and understanding of the developmental interests of the Ethiopian side through the constructing of the dam, but at the same time, these projects must put into consideration Egypt’s historical rights in the Nile water.

On Nov. 4, President Sisi tweeted, “I express my personal gratitude and Egypt’s appreciation to President Trump on the efforts exerted to sponsor talks between Egypt, Sudan and Ethiopia in Washington.”

President Sisi added he was confident the US meeting would break the stalemate in GERD negotiations.


According to a statement by the Egyptian presidency, Trump stressed his keenness on the success of the negotiations.

It was agreed during a meeting that took place between Sisi and Abiy Ahmed on the side-lines of Russia's Africa summit to immediately resume the work of the independent technical committee in a more open and positive manner.

“I hope that our constructive efforts will continue to end all conflicts and disputes in the African continent with the will of its great people," The Egyptian President posted on his official Facebook page.

The foreign ministers further reaffirmed the significance of the Nile to the development of the people of Egypt, Ethiopia, and Sudan, the importance of transboundary cooperation, and their shared interest in concluding an agreement.