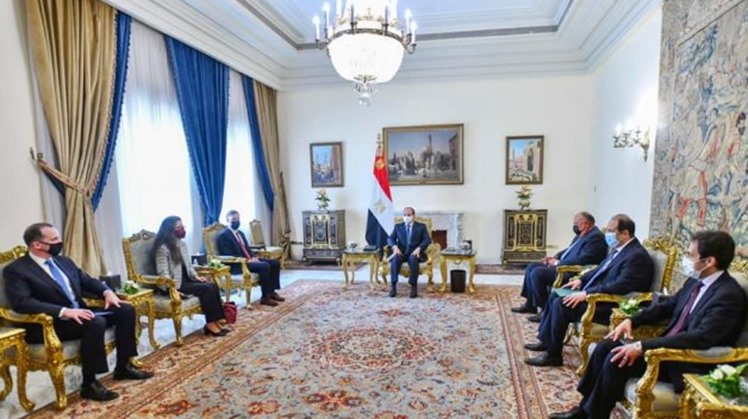 Both parties agreed on the intensification of joint efforts, and others with international partners over preparations for coming Libyan elections. That is in addition to pushing forward the withdrawal of foreign forces and mercenaries as well as the unification of military and security institutions.

President Sisi asserted Egypt's keenness on the success of the political pathway, and the withdrawal of all foreign forces from neighboring Libya, stressing the importance of the Libyan National Elections scheduled for December 24. In that context, the president underscored that the only effective way to achieve stability in the region is the rehabilitation of the nation state concept in countries that endured crises of the sort.

Both sides also held talks over the developments of the GERD crisis, after the issuance of the UN Security Council statement over the matter urging Egypt, Ethiopia, and Sudan to reach a legally binding agreement within a reasonable time frame, in a way that fulfills the interests of the three states.

The president underlined the commitment Egypt has shown throughout the past decade of negotiations, noting that the international community has now to play a significant role in resolving the issue. Equally, he stressed that Egypt would not accept any harm to its water rights.

On that front, Sullivan renewed the U.S. Administration's commitment to deploying efforts that would maintain Egypt's water security, in a way that preserves the water and developmental rights of all parties.

Sisi and Sullivan also tackled updates of the Palestinian Cause, and ways of reviving the peace process. Sullivan expressed his country's deep appreciation for the Egyptian efforts aimed at containing the situation in Gaza and inhibiting its worsening. He also lauded the launching of Gaza reconstruction initiative.

There was congruence on continuous consultation and coordination over that matter to guarantee the stabilization of the ceasefire and the pacification, and the improvement of the humanitarian and living conditions of Palestinians.

The president underscored that the solution to the Palestinian Cause must be in accordance with international references. He also noted that the Palestinian people's restoration of its legitimate rights would have a major impact on the development and change of the region's status quo into the better, opening new horizons of peace, cooperation, and development.

The president asked Sullivan to extend his greetings to U.S. President Joe Biden asserting Egypt's keenness on reinforcing the strategic partnership with the United States that dates back to more than four decades, particularly on security and military levels. The president noted that such partnership has contributed to the security and stability efforts in the Middle East, which is experiencing instability and tensions.

In return, Sullivan extended Biden's greetings to Sisi affirming the United States' eagerness to consolidate existing strategic coordination and cooperation in the coming period. That is in light of the central and balanced Egyptian role in the Middle East, and which has become a main factor in achieving peace, security, and stability. He also commended Egypt's effective efforts on the front of combating terrorism and extremism, stressing the salience of pushing forward cooperation in that field.