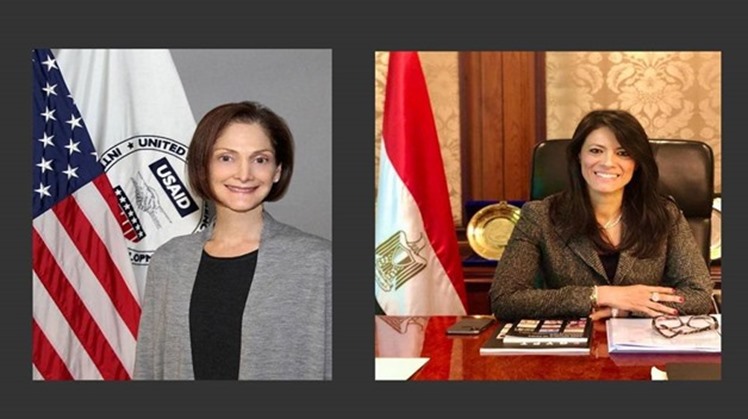 Tue, Jun. 30, 2020
CAIRO – 30 June 2020: Egypt and the United States Agency for International Development (USAID) have agreed on five future projects with a total value of $ 105 million, according to the Ministry of International Cooperation.

The ministry clarified in a statement Tuesday that the projects come in the sectors of supporting women economically and socially, empowering girls, automation of governmental services and digitizing government services, moving to the new administrative capital, economic courts and developing most-needy governorates, in addition to the new cooperation strategy between the two countries for the next five years.

This came during a meeting held via a video conference technique between Minister of International Cooperation Rania Al-Mashat, and Director of the USAID Sherry Carlin, and a number of agency officials.

Al-Mashat emphasized that the USAID is a strategic partner of the Egyptian government in a number of development projects in sectors such as health, education, women's economic empowerment, and agriculture.

She pointed to the Ministry of International Cooperation's keenness to coordinate with the USAID to align the new cooperation strategy between the two countries with Egypt's development priorities and sustainable development goals, and the Ministry's new strategy to list international partnerships based on 3 main axes that are the citizen's focus of attention and ongoing projects and the goal is the driving force.

She also noted the importance of future projects with the USAID in promoting the sustainability of economic reforms, increasing economic growth, increasing women's participation in the formal economy, expanding women's financial inclusion, and working to increase their economic empowerment in the most-needy governorates, in cooperation with a number of partners in the private sector and the National Women's Council.

For her part, the Director of the USAID reviewed a number of future projects for economic and social empowerment of women in Egypt, stressing that the United States Agency for International Development in Egypt is committed to increasing its investments in women's economic and social empowerment in Egypt and gender equality, in order to alleviate negative economic impacts coronavirus on women.

Carlin referred to the new cooperation strategy between the Egyptian government represented by the Ministry of International Cooperation and the US Agency for International Development, which is being prepared for the next 5 years.

The total current portfolio between Egypt and USAID amounts to about $1 billion through bilateral agreements in the fields of agriculture, basic education, higher education, health, tourism, trade and investment, water and sanitation, small and medium companies and women's empowerment, and through the Egyptian American Business Fund to support small and medium enterprises.