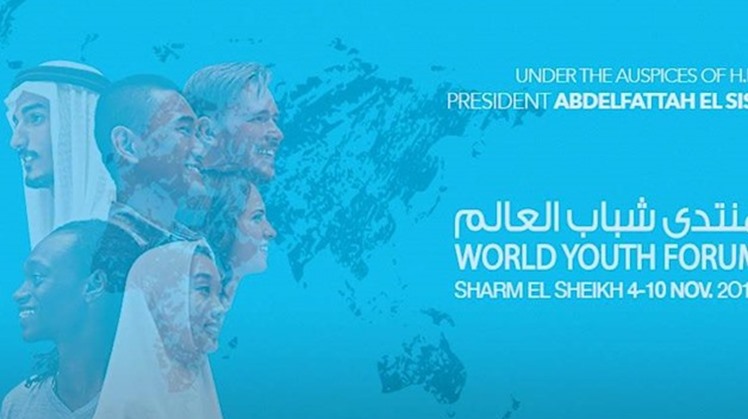 Reports say that this year’s discussions will focus on a number of vital world issues, including food security, climate change, artificial intelligence, artistic creativity, and women’s empowerment, according to Ahram Online.

We are just as excited to meet Elizabeth Velasquez, motivational speaker and author, who will be discussing topics on ”Women and the Right to Development” this year at the World Youth Forum. #WorldYouthForum pic.twitter.com/zzMqeJwrox

At the end of the 2018 WYT, the city of Aswan was declared the capital of “African Youth” for the year 2019. It was also proposed that a forum for Mediterranean youth be held on an annual basis.

The WYF was first held in November 2017 when it brought 3,000 young people from 113 countries to discuss issues, exchange views and recommend initiatives to decision-makers and influential figures. In Egypt and since then, the government has been keen to translate the WYF’s recommendations into action on the ground.

This year’s World Youth Forum agenda is now out! Packed with workshops, sessions and panel discussions that will allow every attendee to stay active!

Head over to the link below to check out the full Agenda: https://t.co/6nxKoWyjLE#WorldYouthForum pic.twitter.com/SMxKXI463W

The latest initiative in this respect came on 27 November when 23 new deputy governors, all young people, were sworn in before President Abdel-Fattah Al-Sisi. As many as 16 governors were also appointed.

The step was surprising, not so much because many were expecting a cabinet reshuffle that day, but because this was the first time in Egypt’s modern history that such a large number of young people were appointed deputy governors. According to presidential spokesperson Bassam Radi, out of the total 16, four governors had held posts in different governorates, while 12 were completely new appointments.

“But all 23 deputy governors are young people, and seven are women,” Radi said.

Following the swearing-in ceremony, Prime Minister Mustafa Madbouli told reporters that one of the main objectives of the appointments was to inject new blood into governorate leadership.

“We want to prepare a new generation of young and professional leaders in all sectors of Egypt, and for this reason we selected 23 young leaders, compared with 12 in the previous shake-up of provincial governors [in 2018], to join the new appointees.”

Most of the deputy governors are between 30 and 35, Madbouli said, adding they were selected only after they had received specialised training at the National Youth Academy and the Institute of Planning in Local Administration and Executive Leadership. “I am sure that in just a few years all provincial governorates in Egypt will be between 30 and 35 years old, capable of taking up all kinds of duties and responsibilities,” Madbouli said.

World Youth Forum is a platform built by promising youth. It sends a message of peace, prosperity, harmony, and progress to the entire world. It engages youth from around the globe in an enriching set-up, allowing them to exchange views and recommend initiatives to decision-makers and influential figures. The forum is a chance for you to engage with top policymakers, network with promising youth from the region and the world that are determined to make our world a better place for everyone.