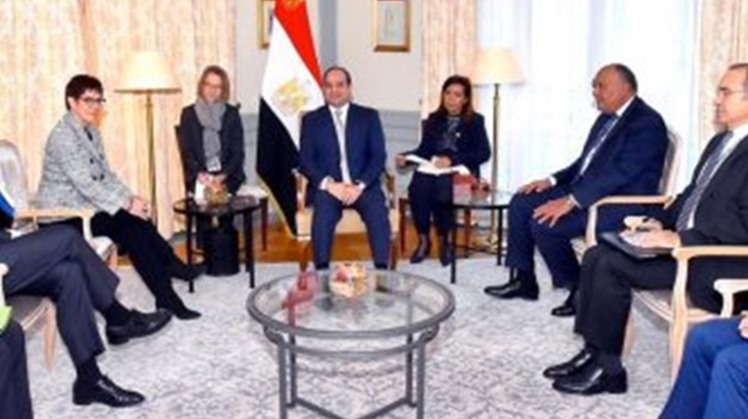 On her side, Kramp-Karrenbauer expressed her appreciation for the growth in Egyptian-German relations, and the intensive coordination between both countries during the meetings of Egyptian President Sisi and German Chancellor Angela Merkel.

The minister asserted the necessity to bolster the military and security aspect of the bilateral relations, particularly in countering terrorism, praising the Egyptian efforts on that front.

On Monday, President Sisi met a delegation from the Federation of German Security and Defence Industries, asserting the need for expertise exchange in that sector. The meeting was attended by Military Production Minister Mohamed al-Assar and Chairman of the Arab Organization for Industrialization (AOI) Abdel Moneim al-Taras.

The German and Egyptian parties discussed the possibility of joint manufacturing given the promising qualifications of the Egyptian Military Production Ministry and the AOI.

In February, Investment and International Cooperation Minister Sahar Nasr stated that German investments in Egypt stand at $7.1 billion in different fields with some 1215 German companies operating in the country.

She detailed that such investments are in the fields of information technology, communication, agricultural services, manufacturing, petrochemicals, engineering and car industries, among others.

President Sisi arrived in Germany on Sunday to attend the G20-Initiative Compact with Africa (CwA) held on Tuesday. On the sidelines, he met with a number of German officials and delegations.