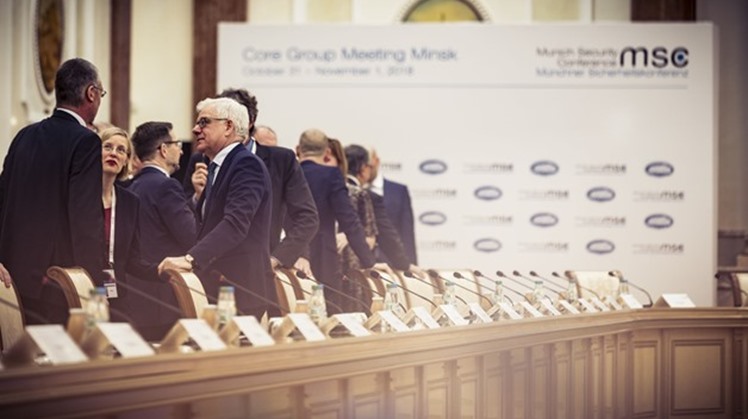 Several heads and leaders of Arab, African and European states participated in the MSC’s Core Group Meeting and discussed “cross border and regional challenges in the Middle East and North Africa” according to an official statement issued on Monday.

The delegation includes Chairman of the MSC Wolfgang Ischinger, foreign and defense ministers as well as chiefs of intelligence of various countries, the statement added.

President Sisi welcomed the convening of the MSC Core Meeting for the first time in Cairo, looking forward to fruitful outcomes that face the challenges of the Middle East, Radi added.

President Sisi shed light on the necessity of arduous efforts to combat security threats and to find solutions to instability in the Middle East, affirming Egypt’s supporting efforts to help bring stability and security to the region.

"Egypt’s counter-terrorism efforts are based on certain fundamentals, including preserving the national state from disintegration, supporting and protecting national institutions, supporting national armies, confronting the spread of armed militias and terrorist organizations, supporting people’s will, and not interfering into other countries’ affairs," President Sisi stressed.

The meeting tackled a number of regional issues of mutual concern such as the political crisis in Libya and the Palestinian-Israeli cause, besides other topics that come among the African Union's priorities for supporting stability and development in the African continent.

"Counter-terrorism and fighting illegal migration have been discussed in the meeting," said Radi, adding that President Sisi affirmed that Egypt exerts enormous efforts to control its borders in order to curb illegal migration and participate in the protection of European security.

According to the official website, an exclusive group of participants has the opportunity to discuss important topics related to international security policy with regional and global actors. Meetings take place on a small scale at different locations around the world. In addition to the central international challenges, the focus is also on issues that are of particular importance in the respective regions.