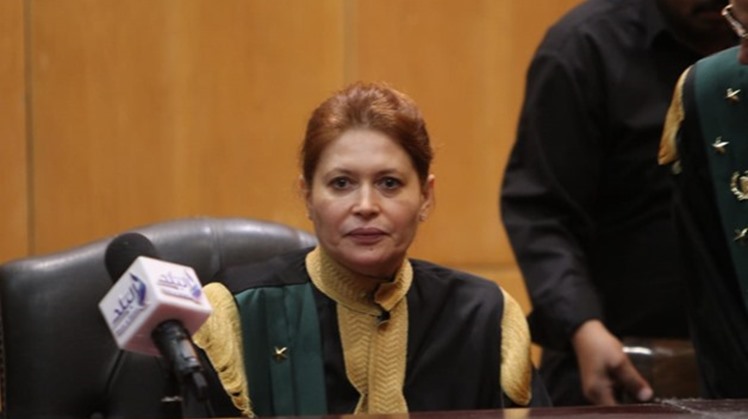 Qandil is the first female judge to take up the judges panel in Egypt’s Criminal Court.

Judge Qandil was one of the ruling judges in a murder case.The defendant was found guilty of murdering his family members for asking to be landed an amount of money of LE 500. When his relative refused to give him money, he got angry, headed to the Kitchen, pulled a knife and stabbed him. The defendant confessed during the investigations.

Earlier, Qandil appeared earlier in May in another case related to stock manipulation. She was one of the jury members of a court headed by Judge Mohamed al-Fekky.

Qandil underwent numerous exams in front of the court of cassation before being accepted among the first batch of Egyptian female judges who applied for courts in 2015, al-Mobtada reported.

Qandil has thrived in her legal career, working on criminal cases since 2015 and participating in several investigation departments in Ismailia and Cairo, Al-Masry Al-Youm reported.

In 2018 the National Council of Women (NCW) released an official statement applauding the promotion of 16 female judges to prestigious judicial positions. Among them was Ammar, appointed as head judge of Qena’s Appeal Court. Moreover, Judge Hassana Shaaban was promoted as the head judge of Tanta Economic Court.

El-Gebaly was listed by Arabian Business as one of the 100 most powerful Arab women. The prominent judge is Egypt’s first ever female judge and the first female to be nominated to the Permanent Bureau of the Union of Arab Lawyers, her profile on Arabian Business read. She was granted the position as Deputy President of the Egyptian Supreme Constitutional Court.