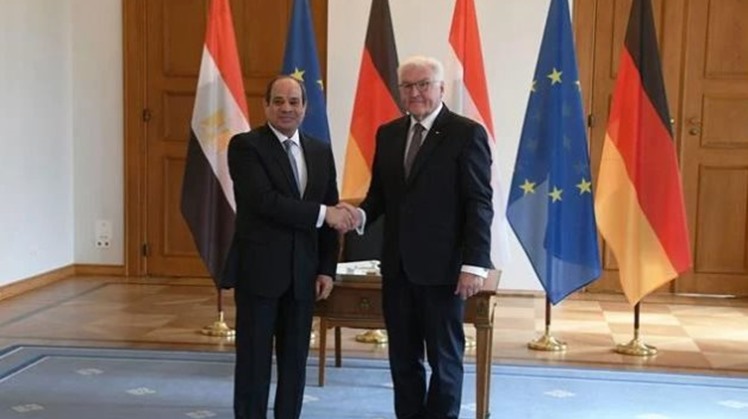 During the meeting, Sisi expressed Egypt’s keenness to strengthen and deepen bilateral relations with Germany especially regarding economy and trade by maximizing the volume of German investments in Egypt.

This comes especially as Germany is one of the most important partners to Egypt inside Europe and in light of the great opportunity to benefit from Egypt’s modern infrastructure and improvement in business climate.

Sisi affirmed Egypt’s fixed stance based on the necessity of backing the pillars of the crisis-affected countries and strengthening their national institutions in a way that end their peoples’ suffering and preserve their resources.

This would also help fill the vacuum that has enabled terrorist groups to expand and spread, Sisi added.

The presidents discussed regional and international issues of mutual concern, especially the crises in Ukraine, Libya, and Yemen, as well as the Palestinian cause.

In this regard, they affirmed the need for reaching a just and comprehensive solution to the Palestinian cause in accordance with the international references.

Steinmeier, for his part, affirmed Germany’s appreciation for Egypt on the official and popular levels, hailing the historic ties gathering the two friendly countries, according to the spokesman.

President Sisi has been in a two-day official visit to the German capital that started Sunday to attend the Petersburg Climate Dialogue, which is held between UN climate conferences, as per an invitation by German Chancellor Olaf Scholz.

Sisi’s participation in the annual dialogue comes less than four months from the UN Climate Change Conference (COP27), which is set to be hosted by Egypt in November in the Red Sea city of Sharm El-Sheikh.

Egypt has vowed during the conference to work on transferring climate action from the stage of pledges to the stage of action, especially by encouraging providing required funding to the countries to fulfill their climate responsibility and ensure the implementation of climate adaptation.