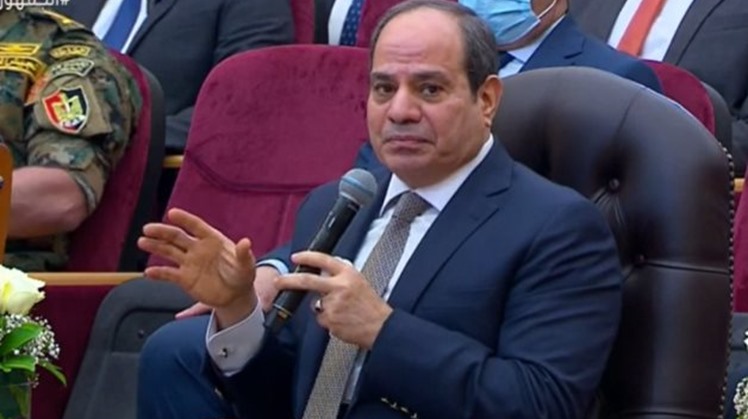 Tue, Jun. 14, 2022
CAIRO – 14 June 2022: Egypt’s President Abdel Fattah El Sisi said Monday that the government has postponed the increase in electricity prices three times so far, not to increase the burden over the Egyptian citizen.

He added during inaugurating the livestock, dairy and mechanized slaughterhouses complex on Monday in Sadat City, Menoufia Governorate, that prices in the Egyptian market are currently much lower than real prices, However the state is making every effort to control prices hike.

“During the past 50 years, Egypt has grown bigger, however its capabilities stayed the same and did not develop for years” Sisi said during the inauguration.

Sisi said that Egypt ‘welcomes and needs’ all efforts of the private sector, civil society and ‘every Egyptian who is loyal to his country’.

This project aimed to enhance the industry in the country, added President Sisi.

The newly- inaugurated research center, ranks third in the world, he added, noting that such projects are carried out in order to enhance the industry.

Sisi then toured the animal and dairy production complex and listened to speeches from different experts regarding the complex different departments.

President Abdel Fattah El Sisi affirmed that the measures taken by the government over the past years contributed to increasing livestock production rates.

The government's participation with the private sector also contributed to increasing the livestock projects, added President Sisi while commenting on a speech delivered by Agriculture and Land Reclamation Minister El Sayed El Quseir in Sadat City in Menoufia Governorate on Monday.

President Sisi underlined the need of upping production rates in the various spheres in order to achieve self-sufficiency and export the surplus abroad.

It is important to make use of the largest area of ​​lands in a bid to control production costs in light of the population growth in Egypt and the increase of prices worldwide, added the president.

The State is exerting strenuous efforts to regulate the market, he said, adding that the global waves of inflation are linked to the repercussions of the Russian-Ukrainian war.

"A major rise in the production cost would have occurred if we dealt with energy prices according to the international rates," he added.

He also pointed out to the high inflation rates in the European and Western countries, although these countries have stable industrial systems, supply chains and governance.

The minister said that Egypt has witnessed over the past eight years unprecedented support to the agriculture sector, with a view to realizing balanced and sustainable development.

Meantime, the minister underlined the main objectives of the animal wealth development strategy aiming to improve local cattle breeds, along with increasing milk and meat production to strike self-sufficiency.

Earlier in May, Sisi attended a ceremony to inaugurate Egypt's 'Future Project for Agricultural Production' at Dabaa-Rod El Farag Road.

Egypt's 'Future Project for Agricultural Production' comprises more than a million feddans, which represents around 50 percent of the New Delta agricultural project, Bahaa El-Ghannam, the director of the project said during the ceremony.

The first phase of the project has been implemented over the past four years and comprises 350,000 feddans, Ghannam said.

He noted that 700,000 feddans will be already reclaimed within the project during this year.

The project will comprise 350,000 feddans cultivated by wheat by 2024, which will produce 1 million tons of the strategic crop.

Egypt's imports of wheat, corn and soybeans stood at $8 billion in 2021, Ghannam said.

During the ceremony, President Sisi urged intensifying efforts within the framework of the project to be fully implemented by 2023.

The national agricultural projects being implemented at a "very high" cost seek to provide job opportunities, including in the neediest governorates of Beni Suef and Minya, besides securing agricultural crops, Sisi said.

“I am in a challenge to meet my people and nation’s needs,” Sisi said, adding: “It is a pledge that I adhere to and seek to fulfill.”