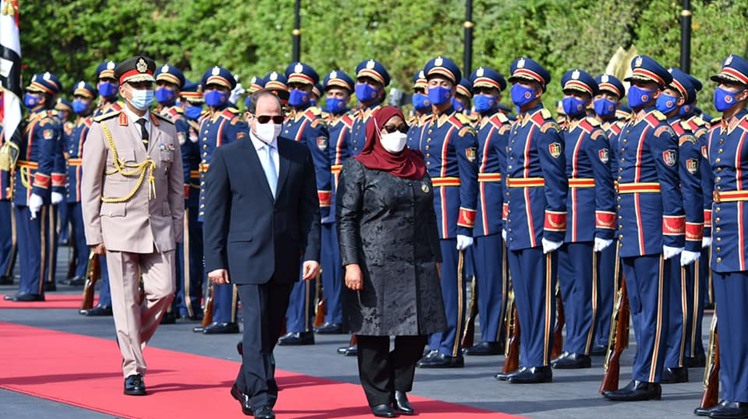 Presidency Spokesperson Bassam Rady indicated that the president expressed keenness on expanding cooperation with Tanzanian on the economic, trade, and security levels.

The Egyptian president also stressed the country's commitment to fulfill its fellow African state's developmental needs in the sectors of infrastructure, health, and agriculture through the investments of Egyptian firms, and capacity-building scholarships to the workers in those sectors.

On her side, the Tanzanian president welcomed the Egyptian initiatives highlighting the successful experience of the construction of Julius Nyerere Dam/Hydropower Station on Rufiji River by Egyptian companies.

The talks also covered boosting Egyptian investments in Tanzania, and cooperation in the fields of agriculture, animal production, and fisheries as well as combating extremist thought and terrorism by promoting the values of tolerance and coexistence.

Both chiefs of states further conferred over the issue of the Grand Ethiopian Renaissance Dam (GERD) as they agreed to continue coordination over that "sensitive and vital" matter in the coming period. President Sisi reiterated to his Tanzanian counterpart "the extreme salience of the water issue to the Egyptian people given its relevance to the national security," the statement reads

The president pointed out that is why Egypt aims for a legally binding agreement on the filling and operation of the dam, in compliance with international law and the United Nations Security Council's presidential statement. He added that sealing an agreement "would reinforce security and stability in the entire region, open cooperation horizons in Nile Basin countries, and accomplish the joint interest of all parties," the press statement indicates.

Sisi and Hassan concluded the meeting by signing a number of MoUs in the sectors of high education, pre-university education, sports, and youth services.