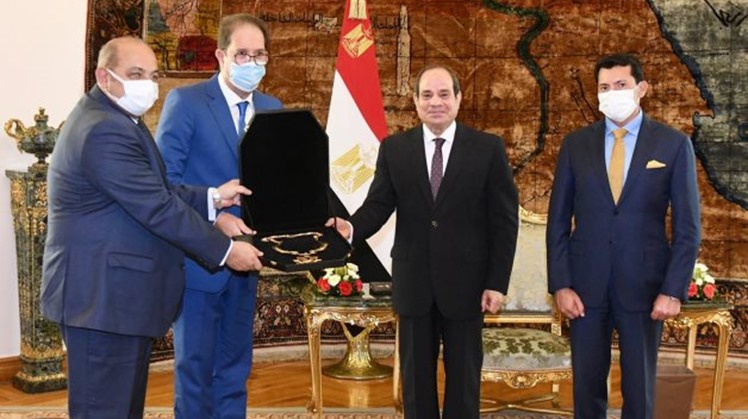 Tue, May. 25, 2021
CAIRO – 25 May 2021: Egypt's President Abdel Fattah El Sisi received on Tuesday the medal of merit of the Association of National Olympic Committees of Africa (ANOCA).

This came during a meeting between President Sisi and ANOCA’s head Mustafa Peraf and the head of the Egyptian Olympic Committee Hisham Hatab, in the presence of Minister of Youth and Sports Ashraf Sobhi.

Peraf granted the medal, which is considered the most prestigious sports award in Africa, to President Sisi “due to Egypt’s pioneering role in the sports domain, as well as its role in the political, social and cultural successes in the continent,” said Presidential Spokesman Bassam Rady.

Peraf praised the sports facilities that Egypt built to host African sports activities, including the World Men's Handball Championship that was held in Egypt from January 13 to January 31.

For his part, President Sisi welcomed the delegatio, pointing out that Egypt provides all kinds of support for holding the ANOCA General Assembly meeting in Cairo despite COVID-19.