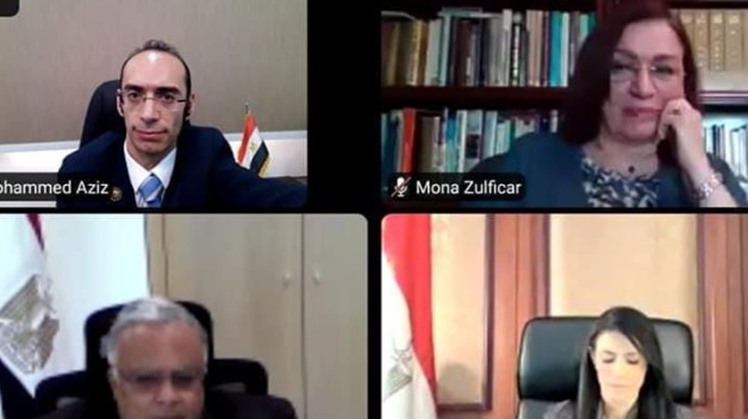 Mon, May. 10, 2021
CAIRO – 8 May 2021: The Permanent Mission of Egypt to the United Nations in Geneva, in cooperation with the Ministries of Social Solidarity and International Cooperation, organized a virtual panel discussion on the legal framework governing the civil work in Egypt on Thursday, May 6, 2021.

The panel discussion was attended by Dr. Nevine Al-Kabbag, Minister of Social Solidarity, and Dr. Rania Al-Mashat, Minister of International Cooperation, and was moderated by Ambassador Dr. Ahmed Ihab Gamal El-Din, the Permanent Representative of Egypt to the United Nations in Geneva. This comes in addition to the participation of a group of prominent representatives of Egyptian civil society, the National Council for Human Rights, and the Deputy of the Human Rights Committee in the House of Representatives. The event was attended by a group of heads and representatives of diplomatic missions in Geneva, as well as many who are interested in Egyptian affairs in the West.

The panel discussion dealt with the prospects provided by the Law Regulating the Exercise of Civil Work (No. 149 of 2019) and its Executive Regulations in strengthening the role of civil society and consolidate its independence within the framework of adherence to the Constitution and Egypt's international human rights obligations. The Law reflects the belief in the partnership of this important sector to the Egyptian State in various development efforts, including the important role of civil society organizations in promoting and protecting human rights, spreading the culture of human rights in society, confronting extremist ideologies, and spreading the culture of volunteer work.

The Minister of Social Solidarity explained that the Law Regulating the Exercise of Civil Work and its Executive Regulations inaugurate a strong partnership between the State and civil sector, as they reflect the state’s commitment to support the civil sector by both guaranteeing the right to establishing nongovernmental organizations and institutions by promoting their financial and organizational capabilities, as well allowing this sector to engage in its activities in various fields. Furthermore, the Law and its Executive Regulations grant the sector numerous benefits and exemptions that enable it to play its desired role. In addition, the Law does not entail any custodial penalties for violating any of its provisions.

Furthermore, the Minister reviewed the advantages that the Law and its Executive Regulations provide to nongovernmental organizations and institutions, in terms of facilitating the procedures for their establishment by mere notification, as well as adjusting the legal status of existing entities. That is in a framework of objective and transparent conditions based on human rights standards and the principles of equality and rule of law. The conditions are also based upon the digital transformation of all procedures, facilitating the activities of nongovernmental organizations, expanding their scope and ensuring continuity by allowing them to carry out many activities that enhance their financial resources in order to achieve their goals. In addition, nongovernmental organizations and their boards of directors are not subject to dissolution, except by a court ruling. The Law and its Executive Regulations provide citizens the opportunity to implement social initiatives in a way that increases the civil work in Egypt.

Dr. Mona Zulfiqar, member of the National Council for Human Rights, Alaa Shalaby, Head of the Arab Organization for Human Rights, Nihad Abu Al-Qumsan, Head of the Egyptian Center for Women Rights, and the human rights lawyer Nagad Al-Burai discussed the advantages and guarantees provided by the new law compared to the old one. Simultaneously, they referred to a number of concerns related to implementing the Executive Regulations, especially with regard to financing, grants, licensing procedures and adjustment of legal status of various organizations and entities.

Member of Parliament Muhammad Abdel Aziz highlighted the importance of Parliament’s role in monitoring Government's full implementation of the Law and its recently issued Executive Regulations. The MP affirmed the new Law has achieved a quantum leap in the relationship between the Government and civil society in Egypt.

The Minister of Social Solidarity responded to the relevant inquiries and concerns raised by civil society representatives. The Minister stressed the openness of the Ministry of Social Solidarity to continuing consultation and coordination with various civil society organizations within a framework of strong and sustainable constructive partnership; a partnership that aims to overcome any obstacles it faces in the context of respecting the Law and its Executive Regulations. In addition, the Minister of Social Solidarity promised to provide all means of support to civil society, and to contribute to strengthening nongovernmental organizations' organizational and financial capabilities. Dr. Nivine Al-Kabbag added that the Ministry has established an open channel through the hotline and website to communicate with various entities, organizations, and bodies to respond to various points that may be viewed as controversial or obstacles arising in the coming period. The Ministry has also published a booklet that includes questions and answers to all inquiries about the Executive Regulations of the new Law.

At the conclusion of the panel discussion, Ambassador Dr. Ahmed Ihab Gamal Al-Din, the Permanent Representative of Egypt to the United Nations in Geneva, praised the open and constructive dialogue that the panel discussion witnessed. It indicates the Government’s view of civil society organizations as its essential partner in the process of promoting and protecting human rights in all their dimensions. Consequently, the Government is keen to enhance communication, coordination and consultation with the nongovernmental sector. Ambassador Dr. Ahmed Ihab Gamal Al-Din added that the discussions revealed Law 149’s reflection of Egyptian Government’s political will and commitment to modernize and reform the legal framework that governs civil society activities in Egypt; a legal framework that reflects genuine efforts to create a favorable public environment that helps build a modern civil state.

The Ambassador pointed that the new Law seeks to remove any obstacles; to address the problems and issues associated with implementing the old Law in order to achieve the desired quantum leap; and to open a new page of constructive partnership between the Government on one hand and civil society, in all its components, on the other hand.

Ambassador Ahmed Gamal Al-Din also stressed that the Law and its Executive Regulations reflect a new approach, philosophy and spirit of openness. They both represent a living, not static, document that is capable of continuous development; noting that implementation on the ground can reveal the need for further improvements or corrections to any deficiencies that may be discovered. The Ambassador stated that speakers and participants of the panel discussion raised important elements, concerns, criticisms and aspirations that the Government will take into account during implementation of the Law.

The Permanent Representative of Egypt to the United Nations added that the Government confirmed during the discussions that it will monitor, with the help of civil society and Parliament, the implementation. Furthermore, the Government will open communication channels with both sides to know their observations and respond to any complaints or requests for clarification and address them immediately. In addition, Ambassador Ahmed Gamal Al-Din stated that the Government will provide capacity-building and various advisory services to nongovernmental organizations. Dr. Ahmed Gamal al-Din highlighted that the country is witnessing the beginning of a new phase of strategic planning in regards to promoting human rights. The new phase is led through the intensification of efforts to finalize the preparation of the first national strategy for human rights. An expanded consultative approach was followed within the framework of the preparation process, which included holding several extensive listening sessions with representatives of civil society.

It is noteworthy that in November 2018, in light of the numerous criticisms to the Law No. 70 of 2017 regulating the work of associations and other institutions working in the field of civil work law, the President mandated the Prime Minister to form a governmental committee to prepare a vision on how to address the deficiencies of that law. This reflects the political leadership's support to the work of civil sector, and the need to overcome any obstacles preventing the Law performing its desired role in supporting the work of civil society organizations.

In implementation of this mandate, the Government formed a tripartite committee, with the membership of the Ministries of Justice, Foreign Affairs and Social Solidarity, with the aim of identifying the various criticisms to the old Law. The Committee held more than 20 sessions to listen to different views in this regard, and received a number of proposals on how best to enhance the work of the civil sector. These efforts are within the Committee’s framework of preparing a draft law that is consistent with the Constitution, Egypt's international obligations, and the principles laid by the Supreme Constitutional Court regarding civil work.

The Committee adopted a consultative approach during the preparation of the draft law through holding an expanded societal dialogue. Consultations involved local and foreign nongovernmental organizations, the National Council for Human Rights, human rights organizations, a number of foreign embassies accredited in Cairo, jurists, and politicians. In this context, 1164 nongovernmental organizations submitted written contributions and suggestions; many of them were taken into consideration and reflected in the bill submitted by the Government to the House of Representatives, which was passed by the House of Representatives in a plenary session held on July 15, 2019. The President then ratified the bill on August 19 of the same year.