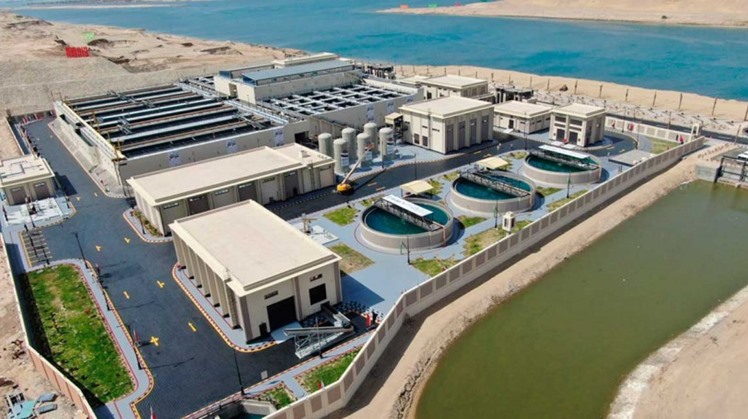 President Sisi’s comments came during the inauguration ceremony of King Salman University in Sharm El Seikh city, besides other national projects in Sinai.

“The Egyptian state is seeking the maximum benefits from the agricultural wastewater,” President Sisi said, noting that is why the government has established the wastewater treatment plant in the Bahr al-Bakar region, in Sharqia governorate.

The cost of the Bahr al-Baqar water station is estimated approximately at 18 billion EGP, the President said, adding that the additional infrastructure works to facilitate the work activities in this region would increase the cost to 25 million EGP.

In mitigation, Egypt is building the wastewater treatment plant to face a water shortage that could affect around 0.5 million people in Sinai.

The plant will treat sewage and agricultural wastewater of the longest drain (Bahr al-Baqar 1 drain).

The 106-kilometer drain of Bahr al-Baqar starts from Dakahlia governorate to Sharqia, Ismailia to the last governorate of Port Said along the Mediterranean Sea; the longest part is located in Sharqia governorate. The drain was established in 1914 for only agricultural wastewater and was named Bahr al Baqar (means in English as the Sea of the Cow due to an accident when a herd of cows drowned in it.)

In the 1970s, the Egyptian government decided to change the drain to receive all kinds of wastewater (industrial and sewage), causing it as “a source of pollution,” according to a 2015 study conducted by environmentalist Mamdouh Salem Seraj on the drain’s negative impacts on human health and Lake Manzala in the period between 1914 and 2014.

The President inaugurated on Saturday the Sharm El-Sheikh Museum, the Royal Vehicles Museum, and the Kafr El-Sheikh Museum. He welcomed a Saudi delegation headed by the governor of Tabuk Province Prince Fahd bin Sultan bin Abdulaziz Al Saud at his arrival.

The newly-built King Salman University in Sharm El Sheikh city is considered one of the national projects for the development of Egypt’s Sinai Peninsula. It has three branches in the cities of Al-Tur, Ras Sidr, and Sharm El Sheikh, with a total of 10 colleges that can accommodate up to 30,000 students.

The majors of the university include Applied Engineering, Computer Science, Technological Industries, Financial and Administrative Sciences, Tourism and Hospitality, Desert Architecture, Language and Applied Languages, and Art and Design.

The Saudi Fund for Development and the Arab Fund for Economic and Social Development have funded several projects in the Sinai Peninsula Development Program.