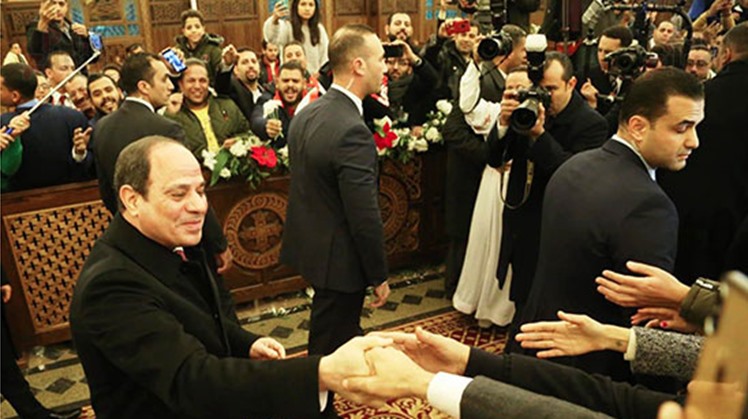 Mon, Jan. 6, 2020
President Abdel Fattah El-Sisi visited the Cathedral of the Nativity of Christ in the new administrative capital to attend the Christmas mass. His Holiness, Pope Tawadros II, was the Pope of Alexandria and the Patriarch of the See of St. Mark left his papal residence accompanied by the wedding of bishops and deacons, and even the altar of the Cathedral of the Nativity of Christ. As scouts teams deployed to guide invitees and worshipers to their places of sitting inside the cathedral, while deacons echo church melodies for this occasion.

His Holiness, Pope Tawadros II, will preside over the Pope of Alexandria and Patriarch of the See of Saint Mark, Glorious Christmas mass at the Cathedral of the Nativity of Christ in the new administrative capital, the seventh Monday evening, January 6, in the presence of ministers and senior statesmen.

For its part, the church issued a set of instructions for visitors and worshipers, so that the gathering will take place at 2:00 p.m., according to the agreement of the assembly areas and move by private buses to the new administrative capital and return to the same areas after the end of the Divine Liturgy. From the gate of 3 meters.

For his part, His Holiness, Pope Tawadros II, Pope of Alexandria and Patriarch of the See of St. Mark, launched his papal message for Christmas 2020, broadcasted by video and translated into 12 languages, including English, French, German, Italian, Chinese, Japanese, Swedish, Danish, and others.

In his letter, which he divided into three gifts, the Pope said that humanity is fulfilled when a person lives love. The Magi who gave gifts to Christ were expressing this love. As for the second gift, it is the work of goodness. The Magi came from the East and with great determination God guided them to the place of Christ, while he considered the third gift She tastes beauty and the most beautiful thing was singing the angels with the birth of Christ.