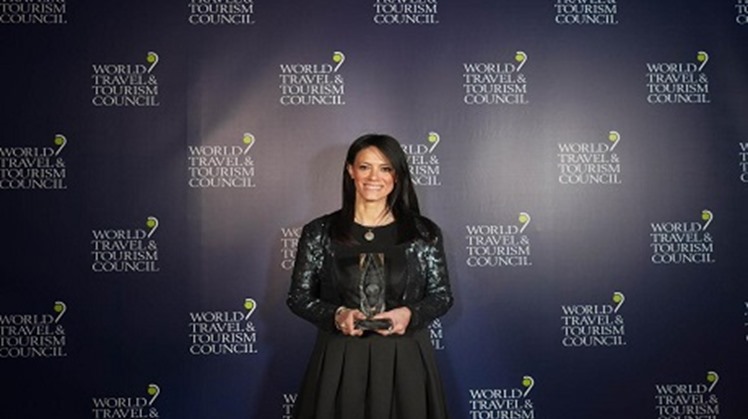 Sun, Sep. 1, 2019
Mrs. Gloria Guevara, President of the International Travel and Tourism Council (WTTC), praised the Egyptian tourism efforts in highlighting the importance of the sector globally as an engine for economic growth, and Dr. Rania Al-Mashat, Minister of Tourism to promote this sector and her awareness of its importance to the world economy. Guevara said, “The tourism sector is a driving force for economic growth; job creation; and community development,” She tweeted on the official website of the International Travel and Tourism Council (WTTC) on the social networking site Twitter.

This was the first time that a State or Minister from the Middle East region received this award from the International Travel and Tourism Council (WTTC).

"The Government of the Arab Republic of Egypt has shown a real commitment to restoring the tourism and travel sector in Egypt and putting it as a top priority after the crisis," said Gloria Guevara, President of the World Travel and Tourism Council (WTTC). The Council presents its annual awards in recognition and appreciation of the governments of the countries for the effort made to promote this vital sector in their country, and the formulation of policies that will lead to tourism development, thus creating a working environment that drives the private sector for more work and investment, and raise the competitiveness of the tourism sector.

The International Tourism and Travel Council (WTTC) published a report on tourism in a number of different countries, reviewing the results of the new research conducted by the Council in 2018 and comparing the travel and tourism sector in 185 countries. The research showed that tourism in Egypt witnessed a huge boom and recovery in 2018 North Africa has become the fastest growing country with growth of 16.5%, four times the global average of 3.9%.

It is worth mentioning that Dr. Rania Al-Mashat participated during the 19th session of the World Summit of the International Travel and Tourism Council (WTTC Global Summit 2019) in a number of dialogue sessions as an official speaker, including the session of the “Global Leaders Dailogue”, during which the presentation and discussion of policies and experiences, the success of the governments of some countries to increase their competitiveness in the field of tourism and travel, and talk about the importance of a suitable working environment, cooperation and continuous coordination between governments and the private sector, and a session under the title of "today's traveler: originality, values ​​and instagram" Today's traveler :) Authenticity, Values ​​and Instagram).