The ancient Egyptian yeasts being used to bake modern bread 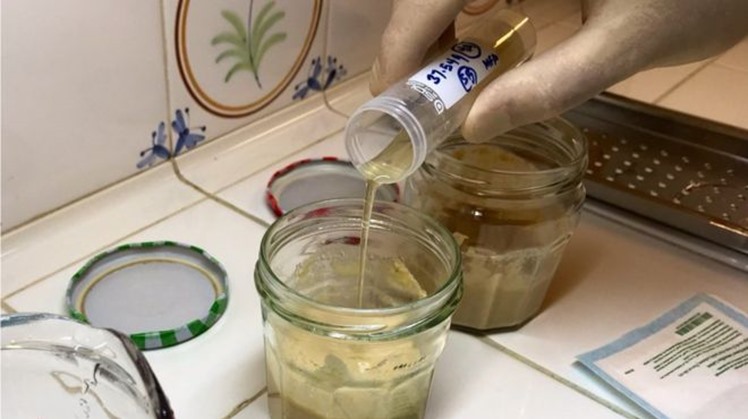 Mon, Aug. 19, 2019
The yeast microbes had been asleep for more than 5,000 years, buried deep in the pores of Egyptian ceramics, by the time Seamus Blackley came along and used them to bake a loaf of bread.

An amateur Egyptologist and one of the inventors of the Xbox game console, he's also a keen hobby baker who routinely posts pictures of his breadmaking projects on social media.

He has, he admits, made his fair share of "horrible, rock-like loaves". But this experiment was in a different league altogether.

The first step was to extract the yeast without destroying the vessels where it was held. With the help of archaeologist Dr Serena Love, Mr Blackley gained access to the collections of Egyptian beer- and bread-making vessels held in two museums in the US city of Boston.

And he enlisted the help of microbiologist Richard Bowman, a PhD candidate at the University of Iowa, to extract and identify the strains of yeast.

Mr Bowman injected nutrients into the ceramics, feeding the dormant yeasts and extracting the resulting liquid. Most of the samples were sent off for laboratory analysis, but Mr Blackley kept one back.

Using water, ancient grains and sterilised containers, he cultivated the starter for a week.

In order to get as close as possible to what the Egyptians would have recognised as bread, Mr Blackley fed the yeasts with grain he'd milled himself from barley and einkorn, an early form of wheat domesticated about 10,000 years ago.

"While this culture was sleeping, modern wheat was invented," Mr Blackley explains. The oldest of the pyramids at Giza was built about 4,500 years ago - by that time, these yeast strains were already about 700 years old.

"It smelled very different from modern starters," he says. "The bubbles were smaller: less pungent, but more active."

But as any sourdough baker will tell you, yeasts are in the air and only need a suitable host or starter to multiply. So how to make sure that this really was Egyptian yeast, and not some modern interloper?

Previous experiments had used yeast samples scraped off the surfaces of pots, but these could easily be contaminated. An Israeli experiment had succeeded in extracting yeast from inside, but only by using methods destructive of the vessels themselves.

To rule out contamination, the yeast samples were sent off for genome sequencing. Some modern yeast strains have already been sequenced, making it possible to identify markers of modernity. 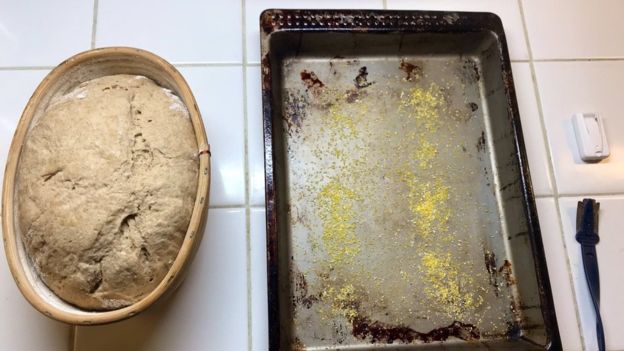 After being left to prove, the risen dough was ready to go in the oven
Mr Bowman admits he was surprised to get results so quickly from the first sampling, but the ability of yeast to lie dormant is well-known.

"The culture can go to sleep and be brought back," he told the BBC. "Yeasts are very robust creatures."

The ancient grains are more difficult to bake with, because they contain very little gluten, but Mr Blackley says the yeast "loved" them: "They created a nice structure and a cake-like crumb - very soft."

The bread had a caramel aroma - sweeter than a modern sourdough. Mr Blackley scored the risen dough with a hieroglyph representing a loaf of bread. 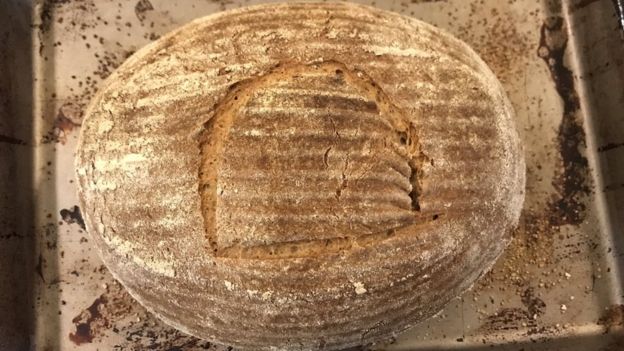 The final product had a "cake-like" crumb, Mr Blakeley says

"It's really different, and you can easily tell even if you're not a bread nerd," Mr Blackley wrote on Twitter
This loaf was baked in a conventional kitchen oven, but as archaeologist Dr Love explains, the ancient Egyptians actually baked in heated ceramic pots.

In the next stage of the project, she and Mr Blakeley will work with ceramicists to recreate ancient Egyptian-style pots and start baking in them.

The impromptu research team already have permission from one more museum to extract yeast samples and have approached two other collections.

The idea is to collect yeast samples from the Old, Middle and New Kingdoms, which are each separated by 500 to 700 years, and bake with all of them.

Mr Bowman will sequence the genomes to track the genetic drift across the centuries.

"This is exactly the kind of stuff that archaeology is intended to do," Dr Love enthuses. However, she adds: "This is grounded in science. This will be published in an academic journal."

So are there any plans to develop the ancient yeasts for a wider audience?

"I was telling my fiancee about this - she went all quiet, but she works in marketing and she was trying to figure out a way to market this," Mr Bowman says. "We'd like to do something to sell it - perhaps collect ancient recipes."

For his part, Mr Blackley - who has studied hieroglyphs in sufficient depth to be able to translate them - robustly defends ancient Egypt from calumnies upon its cooking methods.

"This was a great civilisation and gastronomic tradition. The Pharaoh was the emperor of all the known earth. Now we can recreate their methods and share bread with them."