The Grand Museum: 20% during 12 years and during the era of President Sisi, the volume of achievement reached 98% 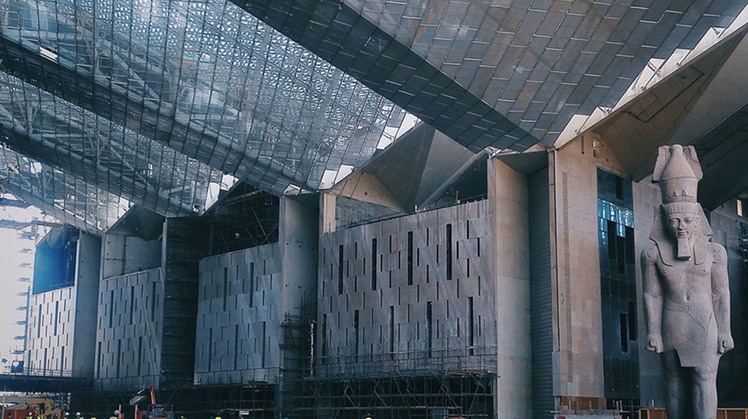 Thu, Jun. 10, 2021
The ancient Egyptian civilization has been the focus of President Abdel Fattah El-Sisi’s attention since he took over the rule of Egypt, as he was keen to resume work on stalled archaeological projects, restore existing museums or establish new museums, increase the financial resources of the ministry, activate the comprehensive vision to secure and preserve antiquities and recover what was looted from them, and raise the efficiency of Those working in antiquities, improving their conditions, communicating with the community and developing awareness of the Egyptian civilization. Among these projects is the national project "Grand Egyptian Museum".

The Grand Egyptian Museum, one of the largest international museums and the largest of a single civilization, which the whole world is waiting for its opening, due to its inclusion of more than 50,000 artifacts, including the possessions of King Tutankhamun, which is presented for the first time in history in front of the public in full, and keenness President Abdel-Fattah El-Sisi decided to remove any obstacles that might affect its completion, and the world will see at the time of its opening things that it can only find in this great cultural edifice.

Achievement volume from 2002 to 2014 = 20%
In February 2002, the foundation stone for this giant project was laid, which continued to progress only a few steps due to the funding crisis, and the museum remained in this state before 2014, when it was looking for ways to finance until the construction work was completed, and at that time, Dr. Mohamed Ibrahim was Minister of Antiquities, to the extent It was discussed with Dr. Ziad Bahaa El-Din, Minister of International Cooperation, that the project has the possibility of increasing the value of the loan provided by the Japanese side, which was originally estimated at 50% of the total costs of the project, in addition to studying all available ways to provide the required funding from the Egyptian side until the end of the project and its opening. In front of the visit, and that was in 2013 AD, and the construction work in the Grand Museum continued to move like a turtle, along with a slowdown in the work of transferring artifacts from museums and various sites to the Museum’s restoration center, and the size of the achievement at that time was only 20%.

From 2014 to 2021 = 98%
In 2014, President Abdel Fattah El-Sisi directed work inside the Grand Egyptian Museum to quickly complete it completely, and from this year until 2021 work in the museum is being carried out continuously with all the necessary funds provided, and it was completed in 7 years unless it was completed 12 years.

President Abdel Fattah El-Sisi has been following, moment by moment, everything that is happening in the Grand Egyptian Museum, and in 2017, and in order to speed up the completion of the project, President Abdel Fattah El-Sisi issued Resolution No. 605 of 2016 approving the letters exchanged between the governments of Egypt and Japan regarding the loan provided by the Japanese government in the amount of 49 billion and 409 billion dollars. Millions of Japanese yen, to implement the project to establish the Grand Egyptian Museum (Phase II), which was signed in Cairo on 10/24/2016, with reservations subject to ratification.

In 2017, 100% of the concrete and metal structure of the museum buildings was completed, 56% of the interior finishing works and 56% of the floors in the external courtyards, and about 76% of the total volume of works was completed. The total artifacts transferred to the museum reached 42,270 pieces.

In 2018, the statue of Ramses II settled in its permanent residence in the Great Hall of the Grand Egyptian Museum, after it was moved 400 meters from the Mit Rahina area to the entrance to the museum, to be the first artifact to be placed in preparation for the opening of the museum.

Also, the antiquities were found on the databases of nearly 82,000 pieces, which are the pieces that have already reached the museum, and others that were registered after making a pure report on them, and they will be transferred later, according to the schedule.

In June, according to the development plan for the fiscal year 2018/2019, the state allocated an amount and capacity of 3.8 billion pounds in favor of the Grand Egyptian Museum.

On June 10, 2018, Dr. Khaled El-Anany said that the project has reached 75%, which has direct support from President Abdel Fattah El-Sisi, who directed the development of the museum at the highest level.

The state, through the Engineering Authority of the Armed Forces, was able to rationalize the cost of implementing the wall by saving more than 180 million dollars only from the estimated cost of the project, which was estimated at about 200 million dollars, meaning that the project was executed with a value of 10% of it in Egyptian hands.

The state was able to reach the estimated value of the project was 6.1 billion dollars, as it saved more than 770 million dollars in the cost of construction, and with this cost confirms that the Great Museum is much less than the cost of establishing international museums, despite the large area of ​​the museum, and also confirms the state's keenness on all A penny is spent on the museum, and all expenses will be returned as a result of operating the services around the museum by an international company to manage and operate the services only.

In 2020, the total construction work done in the museum was completed, which amounted to about 97%, and the project to develop the areas surrounding the museum was implemented, such as developing the pyramids plateau and linking it to the museum. It will be one of the greatest tourism projects established by Egypt, linking the 3,500-acre plateau of the pyramids. , in the Grand Egyptian Museum, which has an area of ​​120 acres, and the removal of the shooting club, which has an area of ​​about 120 acres, and here we will find that the museum is an open museum, which is the pyramids plateau with its treasures, in addition to the covered museum, which is the Grand Egyptian Museum, and this is the idea that the state adopts and implements Steady pace.

The roads surrounding the museum are also being developed, and by the end of this year it will reach 100%, and this is the state’s vision and plan in conjunction with the connection with the pyramid plateau and the Grand Egyptian Museum, which will realize Aher’s dream, which is the “golden cone” to eventually reach the museum’s area of ​​3500 acres in addition to 250 acres, which is The area of ​​the plateau, with a total final area of ​​3750 acres, and there is no museum in the world on this area.