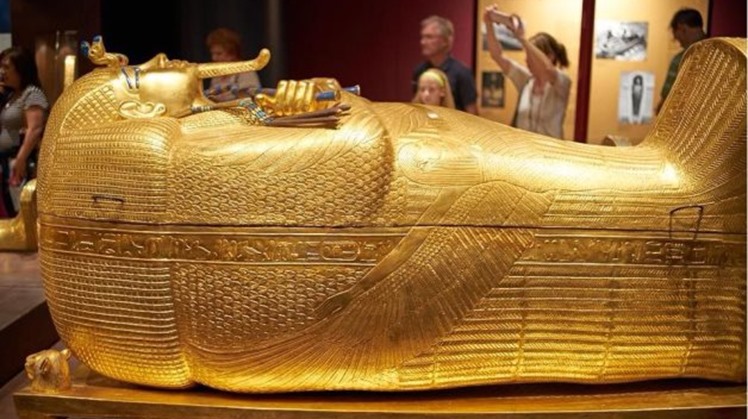 Mon, May. 3, 2021
After the completion of the restoration of the coffin of the Pharaonic King Tutankhamun, and before its transfer to the Hall of the Golden King, in which the Grand Egyptian Museum began implementing the museum display scenario about a month ago, which will fully include all the possessions of Tutankhamun for the first time. .

The coffin of Pharaoh Tutankhamun, was found about two years after the discovery of the tomb of the golden pharaoh king by Professor Howard Carter and funded by Lord Carnavon, in the Valley of the Kings in Luxor, and it was transferred during the past year to the Grand Egyptian Museum, a journey that continued 16 hours, and upon his arrival he was placed in an isolation room in preparation for his restoration and preparation for display.

Dr. Issa Zidan, Director of the First Restoration at the Grand Egyptian Museum, said that during the work to raise the coffin of King Tutankhamun, a team of restorers noticed, through an initial examination of the coffin, that he suffers from severe weakness in the layers of gilded plaster, and that there are some cracks in the cover and the base .

Dr. Issa Zaidan added that the work team was keen on using materials that absorb relative humidity at its height from the permissible limit, as well as using devices to measure temperature and humidity during the transportation process, and one of the most important things that the restoration team used during the transport work is the use of anti-vibration units to protect the coffin during Transportation works from Luxor to the Grand Egyptian Museum.

Dr. Issa Zaidan explained, in previous statements to "The Seventh Day", that as soon as the decision was made to remove the coffin from its room, the first restoration work was carried out, which consists of fixing and strengthening the weak scales, and reinforcing the cracks using Japanese paper, in order to protect the coffin during the stages of its packaging. And take it to the great museum.