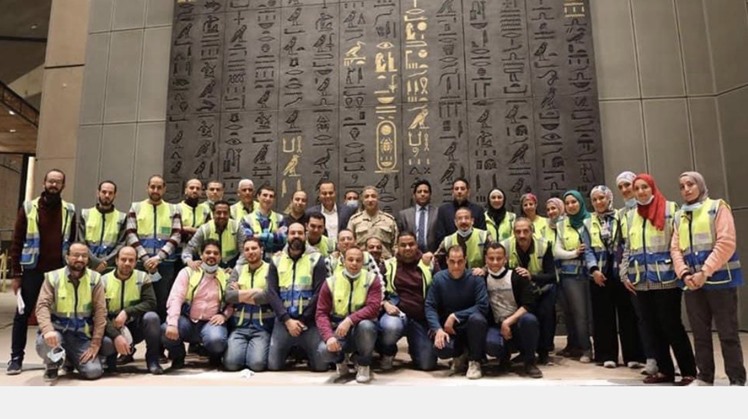 Sun, Apr. 11, 2021
Major General Atef Moftah, General Supervisor of the Grand Egyptian Museum project and the surrounding area, met with a team working on fixing antiquities in the two halls of King Tutankhamun, in the presence of Dr. Al-Tayeb Abbas, Assistant Minister for Archaeological Affairs, Dr. Hussein Kamal, Director General of the Restoration Center, and Dr. Issa Zeidan, Director General of Affairs The Executive Committee for the Restoration and Transfer of Antiquities, in order to follow the latest developments in the work, to determine what has been implemented, and to discuss any proposals or any obstacles they may face to provide full support to facilitate your mission.

Atef Moftah, the general supervisor of the Grand Egyptian Museum project and the surrounding area, praised the effort made, and provided them with support and encouragement, stressing the importance of the work they were doing, as he indicated to the team that their fingertips touched the artifacts as soon as they were moved, to restore and rehabilitate them with extreme precision, and then return Today, touching it by entering the hall of King Tutankhamun, and putting the final touches by fixing it with fattarin.