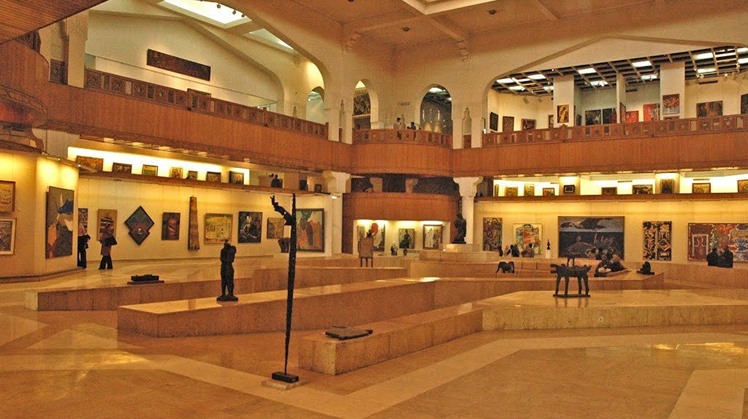 Wed, Nov. 25, 2020
Dr. Enas Abdel-Dayem, Minister of Culture, prepares to open the exhibition of the Hadath Art Museum, at the Opera House, tonight, in the presence of Dr. Khaled Sorour, Head of the Fine Arts Sector, and the last activities that took place at the Museum of Modern Art, were in June 2019, when the Cairo International Biennale was inaugurated. For arts in its thirteenth session.

As for the origins of the museum, the beginning was in 1927 when Muhammad Mahmoud Khalil proposed establishing a museum that includes artworks, which were treasures from his point of view, and although "Muhammad Mahmoud Khalil" is not a plastic artist, he is considered one of the most influential figures in modern Egyptian art. .

In 1966, as a result of the demolition of the previous museum building, its holdings moved to the villa of Ismail Pasha Abul Fotouh in the Dokki neighborhood in Giza, and in 1983 Saray 3 was allocated to the Opera House (which was then the exhibition grounds in Cairo) in order to be the headquarters of the new museum, and it is noticed that the Saray was established on Islamic style.

The Museum of Modern Art has been closed for 10 years, and has been working on it in a contemporary and different way to host the Cairo Biennale, and its return is one of the most prominent challenges that the Ministry of Culture faced, especially in the recent period with the spread of the Corona virus in the world.

In 1983, Saray 3 was allocated to the Opera House (which was then the fairground in Cairo before moving to the suburb of Nasr City) in order to be the headquarters of the new museum. It is noted that the Serail was established in the Islamic style.