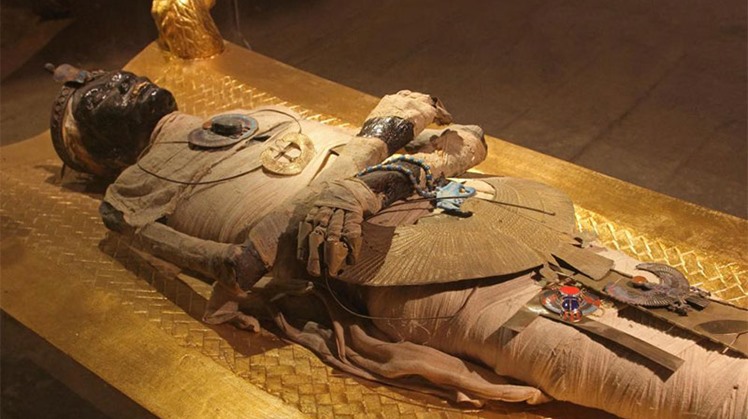 Sat, Nov. 14, 2020
The Ministry of Tourism and Antiquities is preparing for a huge royal procession to transport royal mummies from the Egyptian Museum in Tahrir to the place of their permanent display in the National Museum of Egyptian Civilization, during the coming days, in the presence of a large number of ambassadors and local and international media outlets.

It is an event that will grab the attention of the entire world, for a procession befitting the grandiose ancient Egyptian civilization.

This is within the framework of President Abdel Fattah El-Sisi's directives to complete international archaeological and cultural activities, in a manner that is consistent with the greatness and nobility of the ancient Egyptian civilization, and highlights the country's ongoing efforts to develop and modernize Cairo and other ancient cities.

The number of mummies and coffins to be transported is 22 royal mummies and 17 royal coffins, dating back to the 17th, 18th, 19th, and 20th Dynasties. 18 of the mummies are for kings, while 4 belong to queens.


The royal mummies will be transferred to the National Museum of Egyptian Civilization in a large march, in preparation for the opening of three halls that include the central exhibition hall and the mummies hall.

Professor Moamen Othman, head of the museums sector and a member of the museum's exhibiting committee, said that the main exhibition hall includes a variety of artifacts, including a group of belongings of an ancient Egyptian priest from the New Kingdom, in addition to statues of servants from the Old Kingdom kneading and baking.

The main hall also exhibits a group of colorful wooden statues of deities of Amenhotep II reign, as well as a set of pots and amulets of king Thutmose IV made of blue faience, a papyrus and a copy of the "Book of the Dead" from the late era, a wooden door that belongs to an ancient Egyptian engineer, and a statue of the ancient Egyptian writer made of red granite along with his writing tools, inks and brushes.


Minister's Advisor for Museum Display Mahmoud Mabrouk added that one of the most important artifacts that adorn this hall is the breastfeeding statue and the birth plate from the era of the New Kingdom.


Additionally, a part of the oldest skeleton of a mummy’s foot attached to a compensatory part made of wood, statues of the King Amenemhat III in the form of the Sphinx, a seated statue of the king Thutmose III, a statue of God Nilus from the Greco-Roman period, about 50 lanterns from the Islamic era, a mashrabiya and some of the stucco windows inlaid with colored glass removed from the Citadel.


It is worth noting that the National Museum of Egyptian Civilization is one of the most important projects carried out in cooperation with UNESCO and is one of the largest museums of civilization in Egypt and the Middle East.


The museum highlights the richness and diversity of Egyptian civilization from prehistoric times to present through the various archaeological collections exhibited in the museum.


Irina Bokova, former director-general of UNESCO, and the minister of tourism and antiquities opened a temporary exhibition hall in the museum in 2017.