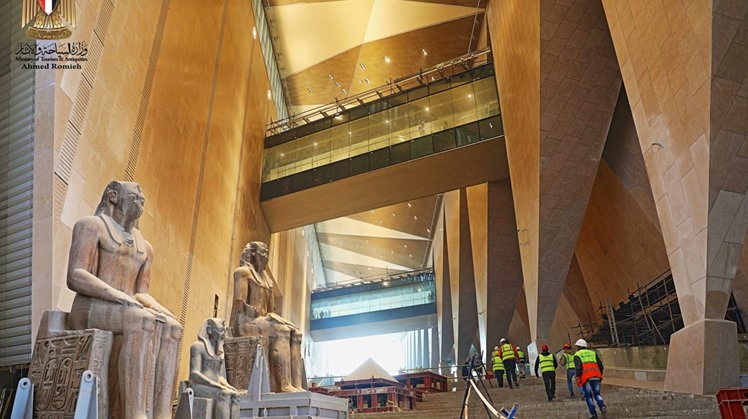 Sun, Oct. 11, 2020
The general supervisor of the Grand Egyptian Museum, Major-General Engineer Atef Moftah revealed that 96.5% of work at the GEM has been completed, amounting to the transferral of 55 thousand artefacts into the museum.

The display vitrines for the King Tutankhamun galleries are 100% completed and are currently undergoing testing.

He added that 90% of the artefacts for the Grand Staircase have been installed, and the control systems and surveillance cameras are also being finalised.

Regarding the implementation of the cable-car idea, Moftah stated that a study is currently being undertaken to connect the beginning of the Fayoum Road with the museum.

The cable-car is not intended to extend to the top of the Giza Plateau pyramids. It is expected that the cable-car will transport tourists from the GEM’s hotel area to the bottom of the Giza Plateau, running parallel to the Fayoum Road and on the other side of Al-Masaken sub-district where there will be access terminals for the new entrance and exit.

He stressed that the idea came after the State’s vision of establishing the largest museum in the world on an area of 3800 acres.

The museum’s overall area includes the 117 acres of the Giza Plateau and the area that links the GEM to the Giza Pyramids, where the Armed Forces Shooting Club once stood, bringing the total area of the museum to 3800 acres.

On the relationship between the GEM and the Fayoum Road, the General stated that the Fayoum Road will be developed and linked to the museum through tourist walking trails.

Furthermore, there is currently a study being conducted to provide a direct link between Cairo Airport and hotels that will be developed within the museum area, located between Fayoum Road and the GEM.

Visitors will be able to move freely within the museum area, from the GEM to the Giza Plateau, in a variety of ways, either on foot, golf-buggy or cable-car.

Moftah also commented on the recent discovery in Saqqara, saying: “I requested that the Saqqara Cache be added to the artefacts scheduled for display in the GEM, as well as the Asasif Cache, both will join the museum’s exhibition programme. We will prepare two exhibition halls of the GEM to be called the ‘Hidden Hall’ to hold the coffins. The GEM has two museum exhibition halls with a total area of 2500 square meters, in addition to three halls measuring 600 square meters for temporary displays and exhibitions of both ancient and modern art”.

GEM’s Executive Affairs for Restoration and Transportation of Antiquities Eissa Zidan previously said that the restoration and construction of the world's first hanging obelisk will be completed soon and placed in front of the main facade of the museum, the bottom of the obelisk will contain the cartridges of King Ramses II.

Zidan added that the aim of the obelisk design made by Major General Atef Moftah, is to make GEM’s visitor able see the cartridge from below.

On October 19, 2019 ministry of antiquities announced the discovery of the largest cache in the cemetery of El-Assasif by the Egyptian archaeological mission. A total of 30 coffins spanning back to the 22nd Pharaonic Dynasty were discovered and placed in a warehouse to protect them from thievery.