Stay Tuned: Details of the latest Saqqara discovery to be announced on Oct. 3 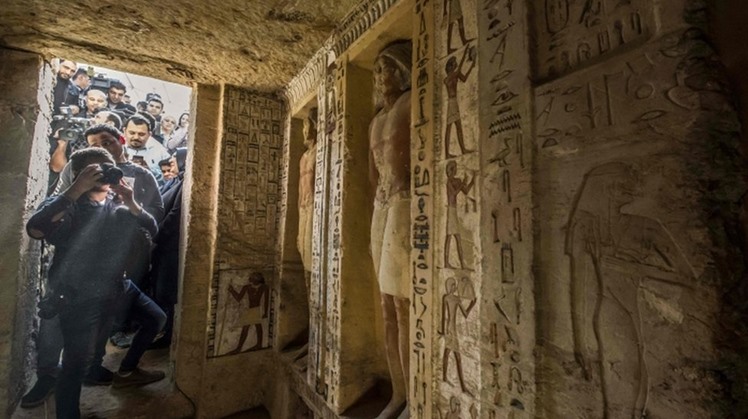 Mon, Sep. 28, 2020
Egypt’s Ministry of Tourism and Antiquities is set to announce on October 3 the details of the new archaeological discovery made by the Egyptian mission excavations in Saqqara.

A total of 27 colorful coffins, which have not been opened in 2,500 years, have been discovered.

Egypt’s Minister of Tourism and Antiquities Khaled el-Anani invited foreign ambassadors in Egypt to attend the press conference, where details of Saqqara's new archaeological discovery will be announced.

The start came with the discovery of a deep burial well, about 11 meters deep. Inside the well, some 13 human coffins, which have been closed for more than 2,500 years, were discovered stacked on top of each other.

A week later, the mission was able to discover another well with 14 coffins, bringing the total number of discovered coffins to 27 closed coffins.

Although remaining underground for thousands of years, the coffins have retained some of their original colors. Archaeologists have also uncovered a group of smaller artifacts at the site, according to the ministry’s statement.

Preliminary studies indicate that the coffins have not been opened since being buried, and the authorities indicated that more coffins and artifacts were likely buried at the same site.

So far, the identity and positions of the owners of these coffins have not been determined. However, these questions will be answered soon as the excavation work continues.

Mostafa Waziri, secretary general of the Supreme Council of Antiquities, said it was unclear how many other coffins could be found in the mine, and archaeologists hope to provide more answers during the excavation process.