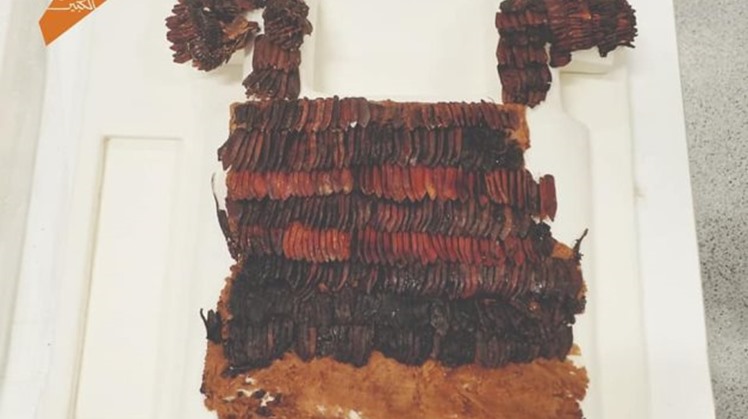 Sun, Sep. 20, 2020
Major General Atef Moftah, General Supervisor of the Grand Egyptian Museum Project, announced that a team of conservation professionals from the Organic Laboratory at the GEM Conservation Centre worked tirelessly to conserve the cuirass of King Tutankhamun.

Moftah further stated that it is within the policy of the GEM to overcome challenges and difficulties in all aspects to protect and display Egyptian heritage. This strategy highlights the GEM’s plan to conserve, prepare and maintain the entire collection of King Tutankhamun for display for the first time in one gallery measuring 75000 square meters.

Dr. El-Tayeb Abbas, Director General of Archaeological Affairs, stated that the use of this type of military cuirasses in leather is rare in ancient Egypt.

Dr. Hussein Kamal, General Director of Conservation Affairs, explained that since the discovery of the king’s tomb in 1922, the cuirass had suffered from severe damage and that most of the leather units had detached from their linen support.

The leather units themselves were very fragile and some were missing. It had been a difficult exercise to restore the cuirass in the 1920s, when Alfred Lucas the English restorer who worked with Howard Carter used paraffin wax to stabilise it.

The cuirass had remained in the Egyptian Museum storerooms and had never been on display due to its bad condition, until it was transported to the GEM.

This cuirass has been preserved by Egyptian specialists; it is a unique and special object and will be displayed for the first time to the public.

Yet another achievement of the GEM Project that we want to share with the world, attesting to the skill and dedication invested to protect and preserve our civilisation and cultural heritage.

GEM’s Executive Affairs for Restoration and Transportation of Antiquities Eissa Zidan said that the restoration and construction of the world's first hanging obelisk will be completed soon and placed in front of the main facade of the museum, the bottom of the obelisk will contain the cartridges of King Ramses II.

Zidan added that the aim of the obelisk design made by General Supervisor of the Grand Museum Atef Moftah, is to make GEM’s visitor able see the cartridge from below.

On October 19 ministry of antiquities announced the discovery of the largest cache in the cemetery of El-Assasif by the Egyptian archaeological mission. A total of 30 coffins spanning back to the 22nd Pharaonic Dynasty were discovered and placed in a warehouse to protect them from thievery.