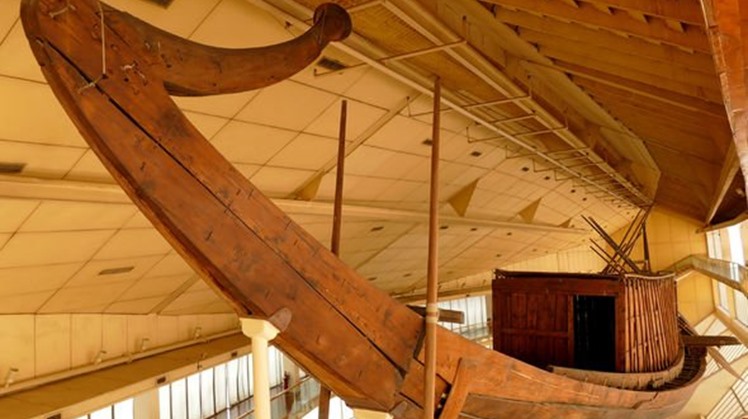 This comes in preparation for the final restoration work phase that targets assembling the boat and displaying it in its specialized hall in the Grand Egyptian Museum.

Zeidan explained that about 1,272 wooden pieces have been recovered from the 13-layer pit in which the ship was found. The wooden pieces were covered with Japanese paper for protection during the lifting process; they were registered and their current state was determined in the museum's laboratory.

He added that the first restoration of 1,200 wooden pieces was carried out, and about 1006 pieces were transferred to the stores of the Grand Egyptian Museum.

Zeidan also revealed the start of the construction of a unique building attached to the Grand Egyptian Museum befitting the grandeur of King Khufu. The building was designed by General Supervisor of the museum Atef Moftah to display the second Khufu Ship after its assembly next to the first Khufu Ship, which will be transferred during the upcoming period from its current location inside a special museum in the pyramids' area.

He further clarified that archaeologist Kamal al-Malakh and restorer Ahmed Youssef worked on the discovery, restoration and re-installation of the first ship, which came to light after staying in the ground for nearly 5,000 years, and is currently exhibited in its own museum, which was opened in 1982.

As for the second Khufu Ship project, Issa Zeidan emphasized that the second Khufu Ship’s restoration and extraction project is one of the largest restoration projects that highlight the fruitful cooperation between Japan and Egypt. The project is carried out in cooperation with the Ministry of Antiquities, Waseda University of Japan and Higashi Nippon International University and with the support of the International Cooperation Agency (JICA).

He pointed out that in 1987 the Antiquities Authority and the American Geographical Society agreed to implement a project to photograph the contents of the second pit without changing its contents, or its climate and environmental conditions through inserting instruments to detect temperature and humidity in the ship’s bore.

Zeidan also clarified that acclaimed engineer Bob Morse, a specialist in drilling technology, designed the device that will be used to puncture the hole without compromising its environment or leaking air into it.

He stressed that the Egyptian-Japanese work team in Egypt has started work on the second Khufu Ship project from 1992 to date.

On the difference between the first and second Khufu Ships, Zeidan revealed that the first ship was in a good state of preservation, while the second ship was in a very bad condition that everyone lost hope in restoring it, until the cooperation between Egypt and Japan bore fruit.