'I Am Afraid to Forget Your Face', the 1st Egyptian short to compete at Cannes Festival 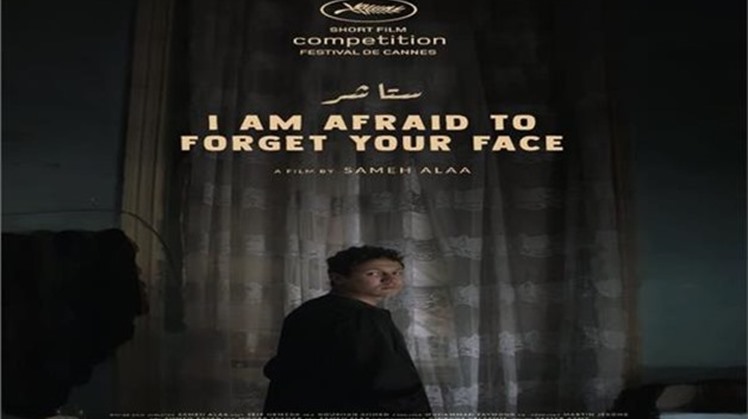 Sun, Jun. 21, 2020
Egyptian short film ''I Am Afraid to Forget Your Face'' was chosen for the short film competition at the Cannes Festival in 2020.

'I Am Afraid to Forget Your Face'' cinematographer is Giorgos Valsamis, editor Yasser Azmy and sound designer Moataz AlQammari and directed by Egyptian director Sameh Alaa who thanked the festival management as well as his short movie crew for this achievement.

''I Am Afraid to Forget Your Face'' will have its world premiere at the 73rd Festival de Cannes, as part of the Short Films Competition,"

A number of Arab and Egyptian filmmakers were keen to congratulate the film cast for this important cinematic achievement.

''I Am Afraid to Forget Your Face'' has been selected among 11 short films from 3,810 films from 137 different countries.

"The short films competition, which grants the Short Film Palme d’or, will take place next autumn at the Palais des festivals in Cannes.

The festival organizers will announce the exact date and the names of the jury members in the upcoming period.

The short films competition is the only contest being held as part of the 73rd Cannes festival, which was cancelled this year because of coronavirus for only the second time in its history.

In 2019, the short film prize was granted to the Greek-French short film ''The Distance Between Us and the Sky'' directed by Vasilis Kekatos.

Also Egyptian director Ayten Amin's new feature ''Souad'' has been announced an official selection at the Cannes Film Festival in 2020, which will be held under an unprecedented atmosphere in the light of the COVID-19 pandemic.


The Festival’s Artistic Director Thierry Fremaux, previously revealed the collective list of the lineup of the 73rd Cannes Film Festival that included a total of 56 films.

The film follows the story of two teenage sisters who live in a Delta city in Egypt.

One of them is leading a virtual life, which she keeps as a secret from their conservative family.

The film stars a number of acting talents casted from Egypt’s Delta cities, and has been shot in different cities outside of Cairo.

While the festival’s physical edition was canceled in May following the French government’s ban on large-scale events to prevent the spread of the COVID-19 pandemic, the festival grouped the presented titles in one single list, without placing them in the usual categories.

The film will be distributed in the Arab world by Film Clinic Indie Distribution (FCID). The film is co-written by director Ayten Amin and Mahmoud Ezzat in their second collaboration after ''Villa 69'' movie which was released in 2013, which received the Special Jury Award for a Film from the Arab World at the Abu Dhabi Film Festival.

''Villa 69'' was produced by Mohamed Hefzy’s Film Clinic.The film follows the story of two teenage sisters who live in a Delta city in Egypt.