Tutankhamun’s message: 'The sun always shines after the storm' 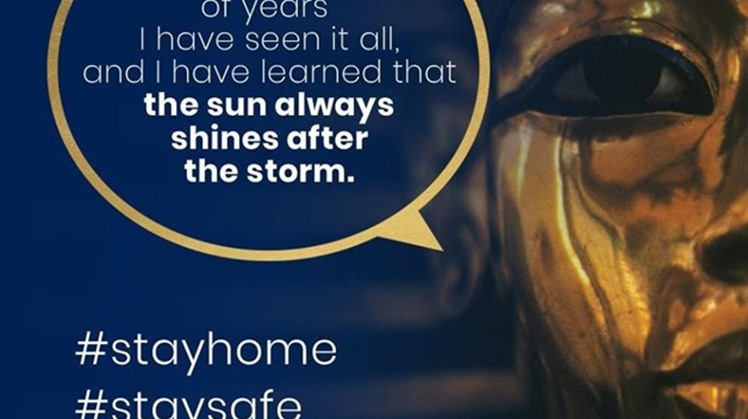 Sun, Mar. 22, 2020
Ministry of Tourism and Antiquities posted a photo on its official Facebook page that contains a message from the golden king Tutankhamun’s, supporting people from all around the world who are facing coronavirus and advising them to stay home.

For thousands of years I have seen it all, and I have learned that the sun always shines after the storm’’ sated the Ministry of Tourism and Antiquities on behalf of the most famous ancient Egyptian king Tutankhamun.

Acclaimed archaeologist Zahi Hawass has finished the script for Tutankhamun Opera, set to debut in the opening ceremony of the Grand Egyptian Museum in late 2020.

Hawass added that November 4, 2022 will be the centenary of the discovery of Tutankhamun tomb, who is an important king to the whole world not Egypt only.

He stated that the DNA tests will reveal a lot of information about the death of Tutankhamun and that he will announce to the whole world in 2020 how the golden king died.

Hawass previously said in an interview with Italia 1 Channel that the temporary exhibition of King Tutankhamun that was displayed at the Grande Halle La Villette in Paris broke the records of turnout of the French cultural exhibitions.

It was the most visited exhibition in France, as recounted by Hawass.

In his interview with the Italian channel, Hawass revealed a number of important facts about the family of the Golden Pharaoh, announcing that his father is King Akhenaten and that the mummy of his mother is located at tomb number 35 where the grandmother of Tutankhamun, Tiye, was buried.