After 14 years of restoration the Pyramid of Djoser will open on the first week of March. 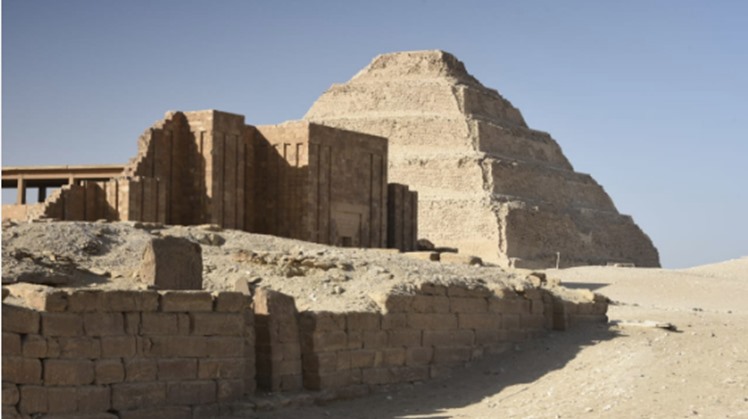 Tue, Feb. 25, 2020
The Ministry of Antiquities has completed the project of restoring the Pyramid of Djoser and developing the surrounding region, within the framework of the Ministry's plan to preserve and develop archaeological sites and advance the services of visitors to it, which is scheduled to open in the first week of next March, according to official sources confirmed by the Ministry.

Dr. Mustafa Waziri said that the restoration project started in 2006 and the work stopped in 2011 and resumed at the end of 2013, and the restoration work included the external facades of the pyramid and the installation of the loose stones, restoration of buildings and stairs of the southern entrance and the eastern entrance from the outside, in addition to the work of careful restoration and the preparation and cleaning of all corridors The interior of the pyramid, and settlement work is underway in the eastern side of the pyramid, in addition to paving the paths of the visit, and setting up a modern lighting system.

Iman Zidan, Assistant Minister for Investment and Financial Resources Development, said that the work of the Saqqara Pyramid area included paving the way from the beginning of the gates of the archaeological area to the outer walls of the pyramid entrance, in line with the nature of the archaeological area to facilitate the access of visitors in general and those with special needs in particular.

Dalia Khattab, the supervisor of the Department of Development of Archaeological Sites and Museums in the Office of the Minister of Tourism and Antiquities, explained that the process of developing the region was carried out according to an integrated plan of action in cooperation with the private sector, with the aim of preserving the archaeological area and providing convenience and services to visitors. The development work also included the development of guidance panels to determine the course of the visit For visitors inside the region, and explanatory boards of the history of the region and the effects in it, in addition to providing a uniform for cleaning workers and security personnel, stressing that all services can be noticed by the visitor once he reaches the archaeological area.

The Step Pyramid of Djoser is the first pyramid and first stone building in the world. It is located in the area of ​​Saqqara monuments, or as many people call it the Step Pyramid, it is one of the important monuments of Saqqara Cemetery west of the ancient city of Memphis in Egypt, built by Amenhotep during the 27th century BC, to bury inside Djoser.