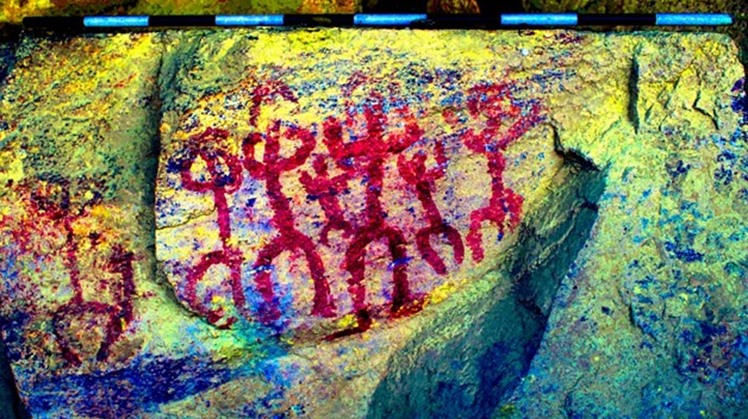 Sun, Jan. 26, 2020
: The archaeological mission of the Ministry of Tourism and Antiquities has finished documenting colorful archaeological inscriptions found in an ancient cave located about 60 km southeast of Sarabit el-Khadem and 30 km North of Saint Catherine.

This is within the framework of the documentation of rock Inscriptions in South Sinai.

Secretary General of the Supreme Council of Antiquities Mustafa Waziri explained that the cave is located in a difficult terrain called Zaranij. It is of sandstone with a depth of about 3 meters, a height of 3.5 meters and a diameter of 22 meters.

Waziri further declared that the cave is the first of its kind to be discovered in the South Sinai region, where it was found by chance, upon the information received from a desert adventurer in South Sinai.

Head of the Egyptian Antiquities Sector at the Ministry Ayman Ashmawi indicated that the discovered cave contains many colorful inscriptions, some are on the ceiling of the cave, others on the stone blocks falling on the floor of the cave.

In the cave, the mission also found large quantities of animal excretions indicating its use as a shelter for Bedouins and livestock, for protection against rain and storms in later ages.

For his part, Hisham Hussein the Director General of the North Sinai Archeology Region and head of the archaeological mission, said the discovered inscriptions depict many different scenes dating back to different eras, that was divided groups.

The first group of inscriptions are drawn on the oldest layer of the ceiling of the cave and is considered the oldest, initially spanning back to 5,500 to 10,000 years BC. It features a dark red color and has views of animals such as donkeys and mules. It is characterized as being harmonically in-line with the body size of animals, unlike other scenes. Five animals of the same era can be distinguished on the ceiling at the entrance to the shelter, and also a group of human hand-prints painted on the ceiling, in addition to other hand-prints on a rock in the middle of the cave.

As for the second group, it is likely that it dates back to the copper age and is characterized by women images and other images for animals.

The third and final group, depicts individuals on camel Hodges.

Hussein added that the mission will complete its work, and the entire area is being surveyed, pointing out that the mission started its work in South Sinai during the past year, where a number of valleys were documented in the Sarabit el-Khadem region.