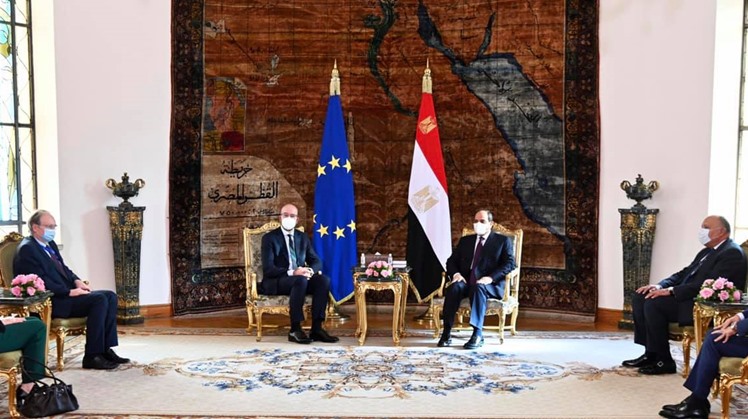 
As they met in Cairo, they agreed on the need to establish this forum to face the hate speech, consolidate the foundations of tolerance, peaceful co-existence and spread mutual respect and the dialogue language.


Religious institutions will take part in this forum.


This comes after many terrorist attacks took place in France after President Emmanuel Macron has defended cartoons depicting Islam’s Prophet Muhammad and said France would not renounce these cartoons. He also called earlier for fighting what he called “Islamic separatism”.

Sisi affirmed that noble religious values have nothing to do with extremist acts and expressed rejection that any religion is stained with terrorism charges.


The president highlighted the need to distinguish the values of Islam, which call for spreading peace, dialogue and acceptance of others, from those using religion as a cover to justify terrorism and extremism.


He also affirmed the importance of understanding the privacy and culture of religions, including great divine values and principles they include, within the framework of respect and non-harm to the feelings of others by insulting religious symbols and sacred beliefs.


The president stressed that this requires consolidating all international efforts to extend bridges of understanding and brotherly feelings.


He referred to the Egyptian experience in establishing the principles of accepting others, tolerance and moderation and renouncing extremism and violence.


Michel, for his part, affirmed the European Union’s keenness to strengthen cooperation and consultation with Egypt in all fields, especially combating extremist ideology at the regional and international levels.


He referred to Egyptian efforts to achieve rapprochement and understanding among different religions.


During the meeting, Sisi and Michel also discussed relations between the EU and Egypt, especially in trade and economic fields.


They discussed ongoing consultation between the two sides on important regional and international issues, including developments in Libya.


Sisi called for making use of the recent boost in developments to achieve a comprehensive political settlement in Libya, in accordance with the outcome of Berlin conference and Cairo Declaration.


The Egyptian president also affirmed the importance of maintaining ceasefire and stopping foreign interference and the transference of foreign fighters and mercenaries into the Libyan territory.


Sisi also discussed the situation in the eastern Mediterranean region, stressing the importance of strengthening international efforts to stop any activities and unilateral measures that violate the international law and Security Council resolutions related to combating terrorism.


The developments of the Grand Ethiopian Renaissance Dam issue were also discussed.


Also, Sisi and Michel discussed the situation in Syria, Iraq and Yemen. They agreed on the need for a comprehensive political settlement to deal with these issues, in a way that would protect their national institutions as well as the sovereignty of their territories and curb illegitimate foreign interference in their affairs.