Africa needs a visionary project for its infrastructure to contribute to development: Sisi 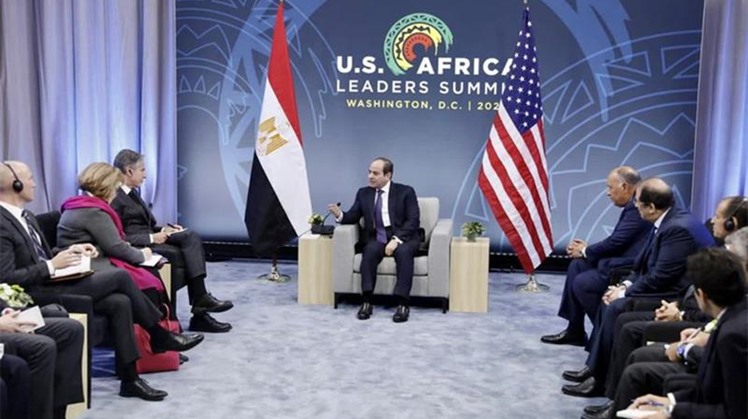 Thu, Dec. 15, 2022
Such a project, whose aim is to develop a comprehensive vision for Africa's infrastructure, requires mobilising resources and support from major countries and global development experts, EL-Sisi said.

El-Sisi has been in Washington since Tuesday night to participate in the summit alongside nearly 49 heads of state and senior government officials from African countries.

The summit aims to enhance cooperation between the two sides – including in economic engagement and commitment to democracy and human rights, according to a previous statement by the AU mission to the US.

It witnessed discussions on new initiatives to increase US engagement with the African Continental Free Trade Area (AfCFTA).

The summit is also set to launch initiatives to boost the continent’s recovery from COVID-19, bolster food security, and promote investment in infrastructure, health, and renewable energy projects, among other priorities, the AU mission added.

President Biden is set to announce his administration's support for the AU to become a permanent member at the Group of 20 (G20).

Addressing the summit on Wednesday, Biden called for a long-term partnership with Africa rooted in good governance as US businesses unveiled billions of dollars led by tech investment for a continent, according to AFP.

"When Africa succeeds, the United States succeeds. Quite frankly, the whole world succeeds as well," AFP quoted the US President as saying.

The Biden administration is laying out more than $55 billion in support over the three-day summit. On Wednesday, it welcomed US and African businesses, promising more than $15 billion in trade deals.

Earlier in November, during the 27th UN Climate Change Summit held in Egypt’s Sharm El-Sheikh, El-Sisi launched "Advancing Adaptation Action in Africa” initiative after succeeding to obtain financial support from the US and developed countries to the tune of $150 million and hosting the initiative’s management unit in Cairo.

Moreover, as part of the US Emergency Plan for Adaptation and Resilience (PREPARE), the US has doubled its Adaptation Fund Pledge to $100 million.

El-Sisi also attended a dinner at the White House for African leaders participating in the summit, upon an invitation from Biden.

During the summit, El-Sisi will focus on a host of issues of concern to African countries. He will discuss the current global challenges facing Africa and ways to strengthen African-American partnership in confronting the food security crisis, Rady said on Tuesday.

El-Sisi will also discuss means to facilitate the integration of African countries into the global economy to benefit from the available opportunities to achieve economic growth, transfer technology, and drive foreign investment.

El-Sisi and Blinken expressed mutual commitment to strengthening and further promoting the longstanding strategic partnership between Egypt and the US, which “constitutes a fundamental pillar to maintaining security and stability in the Middle East region”.

They both looked forward to boosting coordination and consultations in the coming period on various political and security issues of common interest.

In 2022, Egypt and the US are celebrating 100 years of diplomatic ties which were established in 1922.

“There is a lot of history, but, I hope, a lot of good history we can actually make together in the months and years ahead,” Blinken said in April prior to his meeting with his Egyptian counterpart Sameh Shoukry in Washington DC.

“The strategic partnership that exists now between Egypt and the United States over four decades has been mutually beneficial, and I believe there is much more work for both of us to do to further strengthen the relationship, and also to deal with the various challenges that I believe we can only meet through the continuing of our cooperation and our interaction,” Shoukry said at the time.

The volume of trade exchange between Egypt and the United States hit $7.3 billion during the first nine months of 2022, compared to $6.5 billion in the same period of 2021, a 13.4 percent increase, according to the Egyptian Central Agency for Public Mobilisation and Statistics (CAPMAS).

The Egyptian president also held a meeting on Wednesday with US Secretary of Defence Lloyd Austin at the Pentagon where they agreed on the need to strengthen Egyptian-American military relations.

Austin emphasised the deep appreciation for the personal efforts of El-Sisi and the very balanced and effective spirit of leadership to achieve security, stability and calm not only in the Middle East and Africa, but also at the global level.

He also praised the president's efforts towards various international issues and crises, according to a statement by Rady.

This, Austin adds, is an extension of Egypt's historic role in establishing and spreading a culture of peace and coexistence in the region, which is a very important role for the United States.

For his part, El-Sisi affirmed Egypt's keenness to support its strategic partnership with the United States, especially in the military aspect.

He also emphasised the importance of cooperation in the field of security between both countries, especially in light of the exceptional circumstances that the region and the world are witnessing.

In this context, Rady said, it was agreed during the meeting to continue strengthening military relations between Egypt and the United States; these relations being the core of the strategic partnership between the two countries.

It was also agreed that these relations support both countries' responsibility and efforts towards restoring security and stability in the Middle East.

Egypt and the US have had firm military cooperation in recent decades, including conducting joint military drills.

The two countries continue to coordinate on vital regional issues of mutual concern, including the search for a political resolution for the Israeli-Palestinian conflict.

The US has been the main arms exporter to Egypt between 2000 and 2019, providing about 41.6 percent of Egypt's weapons, followed by Russia which provides about 25 percent, according to 2021 data by the German database company Statista.