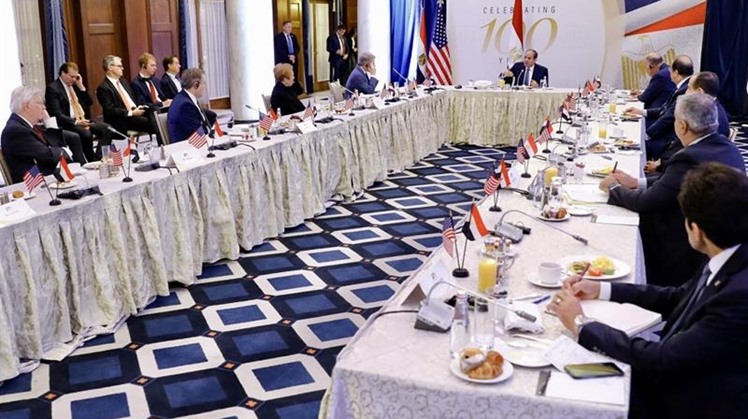 Thu, Dec. 15, 2022
In a meeting in Washington with leaders of US Jewish organisations, El-Sisi affirmed that resolving the Palestinian cause will clear the way for a new era of peace, cooperation, development, and peaceful coexistence in the region, Presidential Spokesman Bassam Rady said in a statement.

Egypt will continue to be supportive of any sincere effort that ensures reaching a fair and permanent solution to the Palestinian cause based on international legitimacy resolutions and the two-state solution, the president said.

He affirmed that such a solution would guarantee the inherent rights of the Palestinian people.

Together with international partners, Egypt has sought a settlement to the Palestinian-Israeli conflict based on the two-state solution whereby an independent Palestinian state is formed on the 4 June 1967 borders with East Jerusalem as its capital.

Egypt has affirmed that regional stability in the Middle East cannot be achieved unless the Palestinian cause is settled in a just and comprehensive way.

During the meeting, the leaders of the Jewish organisations expressed their appreciation for Egypt's efforts to lay the foundations of peace and calm in the region.

The meeting called for intensifying Egypt-US cooperation on various regional issues and highlighted the deep strategic relations between the two countries.

The Egyptian president is in Washington to participate in the three-day US-Africa Leaders Summit, hosted by US President Joe Biden 13-15 December.

He also met on Wednesday with leading Republican members of the US House of Representatives as well as Republican and Democratic congressmen of the Friends of Egypt Caucus, where he discussed enhancing Egyptian-US ties amid global crises.